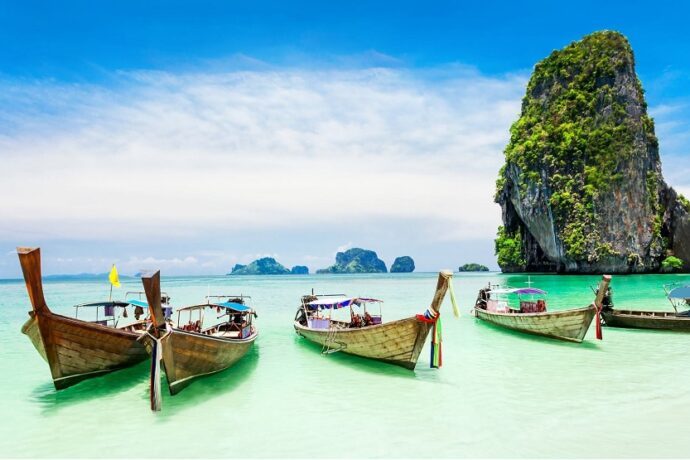 The baht is the official currency of Thailand (capital Bangkok) a country with a monarchy led by King Maha Vajiralongkorn (Rama X). Its ISO 4217 code is THB and its symbol is ฿.

The Thai baht is divided into 100 satang and its issuance corresponds to the Bank of Thailand. As of  October 2019, the equivalent of the baht currency to the euro is 1 euro = 33.58 baht.

History of the thai baht

The origins of the baht as the official currency of the Kingdom of Thailand dates back to the 19th century, when the baht was a unit of weight commonly used in the country. Baht coins were minted in silver and gold and were denominated based on their weight in bahts.

In 1897 began the process of decimalization of the baht in 100 satang that remains in use nowadays. Only during World War II did the baht set its value with respect to the Japanese yen.

From 1956 to 1973 the baht aligned its price with that of the US dollar. Until 1997 the exchange rate was set at a rate of 25 THB per dollar. In January 1998, this proportion fell to its lowest value, with THB 56 per dollar and since then the ratio of both parities has been gradually increasing until its present rates of around 34 THB per dollar.

The Bank of Thailand is in charge of issuing the currency of Thailand. It was  set up in 1939 as the country’s first financial institution and its activity then consisted of the commercialization of Thai Treasury obligations, the financing of public investments and the regulation and banking exchange with the official entities of the country.

The thai baht coins currently circulating in Thailand are from the new series issued in 2009 in which the portrait of King Rama IX was updated. The 2 baht coin changed its usual alloy for a cheaper bronze and aluminum alloy. Currently the currencies in circulation in he country are as follows:

The exchange rate in euros, pounds or dollars of all these coins is negligible, keep that in mind.

The Baht banknote system has remained unchanged since 1988 with the following banknote denominations in circulation:

The Thai baht banknotes in circulation in the country are of several series issued between 2005 and 2018. The main distinctive sign of the last series, the 17th, is that they carry the effigy of the current King Rama X on the obverse, touched with the uniform of the Thai Air Forces.

The reverse sides all show, two by two, the effigies of the predecessors of the current King, all of the Rama dynasty.

Colured green, this note shows the portrait of King Rama X on the obverse and the kings Phra Buddha Yodfa Chulalok (Rama I) and Phra Buddha Lertla Naphalai (Rama II) on the reverse. If exchanged today, this banknote would be equivalent to about 50 euro cents.

Bluish-colored note with the portrait of King Rama X dressed in the uniform of the country’s air forces on the obverse and that of the kings Nang Klao (Rama III) and Mongkut (Rama IV) on the reverse. The counter value in euro of this note would be equivalent to 1.30 euros.

Reddish banknote with the portrait of King Rama X dressed as a military man on the obverse and portraits of the Chulalongkorn kings
(Rama V) and Vajiravudh (Rama VI) on the reverse. The value in euros of this note would be today of around 2.70 euros.

Violet banknote with the portrait of King Rama X dressed in military uniform on the obverse. On the reverse it bears the portraits of the kings Prajadhipok (Rama VII) and Ananda Mahidol (Rama VIII). In exchange, this banknot would be equivalent to about 13.50 euros.

The 1000 thai baht note has a gray / brownish colour. It shows the portrait of King Rama X on the obverse dressed in military uniform and himself along with King Bhumibol Adulyadej (King Rama IX) on the reverse. Its issuance dates from July 28th, 2018. In exchange, this ticket would be equivalent to about 26 euros today.

If you search Google for “Euro to thai baht exchange” you will find dozens of websites (“currency converters”) that offer a “price” of the day. You will also see this graph with the prices of that pair of Google Finance currencies. Something like this (October 24th, 2019):

As you can see, the exchange rates in the last year have been gradually falling from the ratio 1 euro = THB 38 to THB 34 per euro, but it must be taken into account that this graph represents the value of the “currency” Thai bat against the euro, and not that of the real banknote currency, which is lower. In fact, in the curreny suppliers in Spain today you can buy bahts at an exchange rate around THB 29 for every euro. Nothing to do with the euro-baht currency exchange. 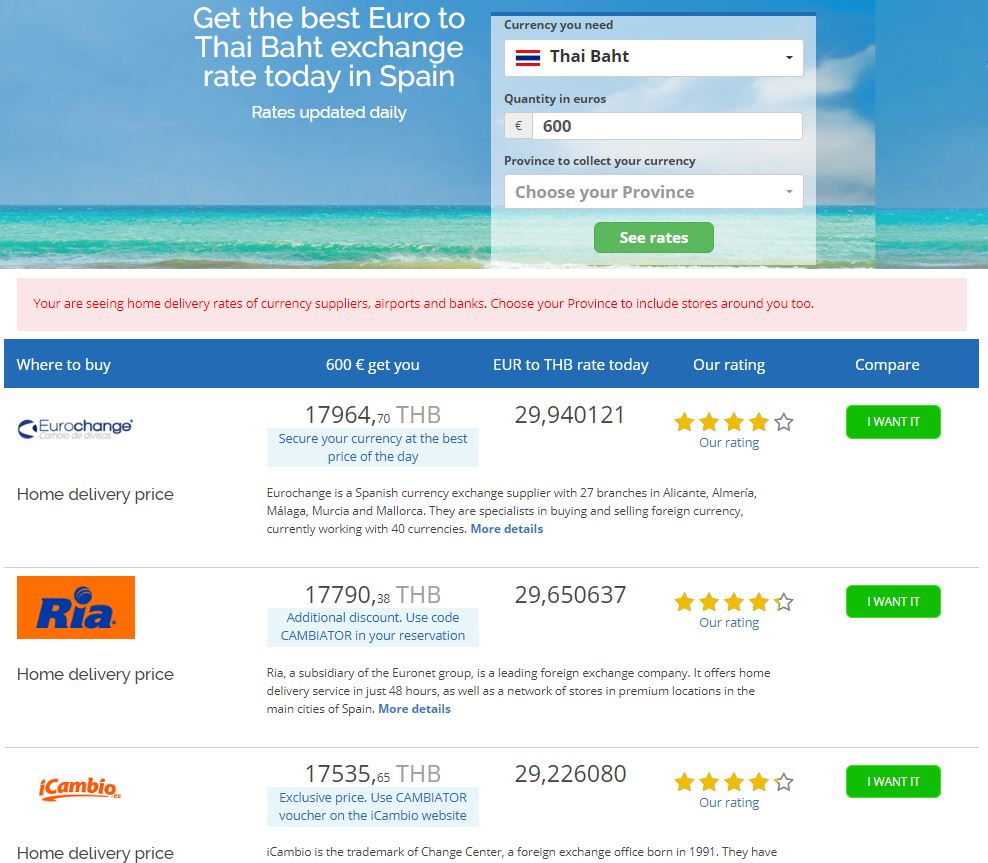 So, next time you see these values ​​on Google and other currency converters with your mobile phone, you should keep in mind the following:

If you need bahts in banknotes you will have to go through the retail market (bank or currency supplier). This market means that THBs have had to be “transported” by someone so that you can enjoy them (or bought from travelers from Thailand passing through Spain previously). That is, moving banknotes from one place to another has logistic costs that will make its selling price more expensive (the exchange rate that will be applied to you by the seller).

The baht is not a very abundant currency in Spain. As a result of its shortage, its price is more expensive in Spain than in Thailand. If you decide to buy thai bahts in Spain, we recommend to anticipate the purchase and order them online to get a better price.

Where to change thai baht in Spain

In Spain the thai baht can be exchanged in some high street banks, currency suppliers and airports. This is what you have to know about the three options before buying or selling your bahts:

To find out the euro to thai baht or baht to euro exchange rates today in Spain, the best thing you can do is use our currency comparison engine. It is absolutely free for users and will save you money and headaches when cruising Spain.