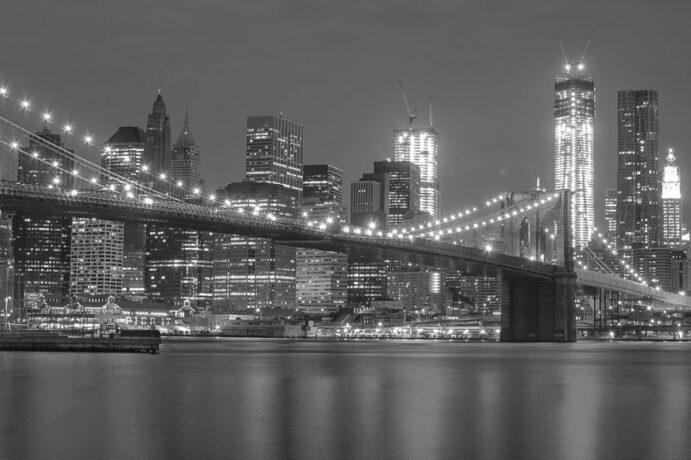 The dollar is the top most currency in circulation around the world. In the past, countries like Ecuador or El Salvador adopted the dollar as the national currency to combat the fluctuations of their local currencies (the sucre in Ecuador). The dollar gives such stability in countries in economic distress that savings in local currency will be converted directly to US dollars as a refuge currency not exposed to sudden devaluations.

In addition, many other countries have created their own banknotes inspired by the US dollar:

Origins of the American dollar

The dollar was born when on a trip to London in 1751, Benjamin Franklin asked the metropolitan parliament for permission to coin his own currency. Given the refusal of the English, it is said that Franklin bought a printing press that gave rise to the “Continentals” just before the independence from British rule.

In 1792, the Secretary of the Treasury of the George Washington government, Alexander Hamilton, inspired himself on the Spanish “real”(called by the Americans “Spanish dollar”). The “real” was at that time the most widespread currency in the world. In fact, it was the official currency in the state of Virginia.

At the beginning of its journey, the value of the dollar was quoted in silver. Then it changed to gold in 1944, when in the international agreements of Bretton Woods it was agreed to link the value of the currencies of the world to that of the US dollar. But as long as the Federal Reserve of the United States kept the dollar fixed in reference to the price of gold.

The gold standard went down in 1971, giving way to the current paper pattern. That is, today the dollar, like the rest of the currencies that circulate, is nothing more than a fiduciary value (currency or “fiat” money). We carriers “believe” in the support that each note we have in our pocket has, although the paper itself is worth only a few cents to produce it.

As we have seen before, any dollar note must be printed by the BEP (known as “Federal Reserve notes”), which has two production centers in Washington DC and in Fort Worth, Texas.

On the BEP website you can see all the denominations currently in circulation. Today there are dollar bills with the following denominations:

There are also 2-dollar bills, but they are scarce. Also dollar notes of denominations exceeding $ 100 are also in short supply. On July 14, 1969, the Department of the Treasury and the Federal Reserve System announced that banknotes in denominations of $ 500, $ 1,000, $ 5,000 and $ 10,000 would be discontinued immediately due to their lack of use. Although they were issued until 1969, they were last printed in 1945.

Parts of a dollar bill

The parts of a dollar bill are these: 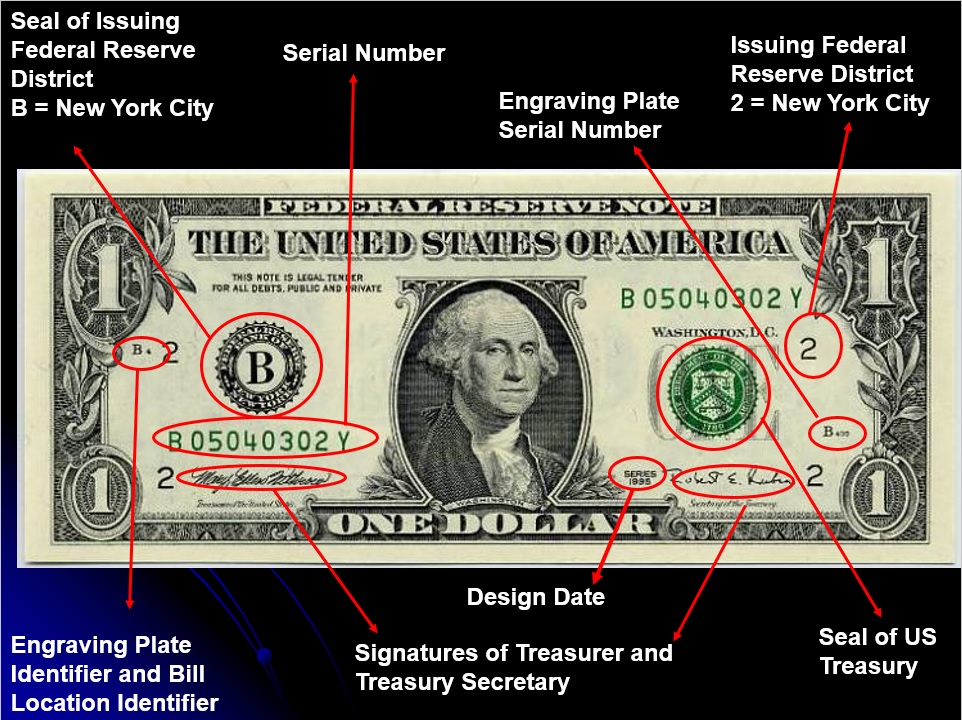 Parts of a dollar note

Since its first printing in 1963 (although the original design is from 1862), the design, with the portrait of George Washington on the front and the Great Seal on the reverse, has not changed.

George Washington (1732-1799) was the first president of the United States (1789-1797) and commander in chief of the revolutionary Continental Army in the War of Independence. He is considered the  “Father of His Country”.

The two-dollar bill is rare. It began printing in 1869 and bears the portrait of Thomas Jefferson third president of the United States of America (1801-1809). Jefferson is considered one of the founding fathers of the nation. And the most current is from 2013.

The 5 dollar bill shows the portrait of Abraham Lincoln, politician and American lawyer. Lincoln was President number 16 of the United States of America between March 4, 1861 and until his assassination on April 15, 1865.

This 20 USD note shows the portrait of Andrew Jackson (1767-1845) statesman and seventh president of the United States.

This note shows the portrait of Benjamin Franklin (1706-1790), American politician, scientist and inventor. He is considered one of the Founding Fathers of the United States.

The agency responsible for the production of coins is the United States Mint. Dollar coins (expressed in cents) are these: 1 cent, 5, 10 and 25 cents. 50 cents and 1 dollar coins are not very frequent.

The names of the dollar coins approved in 1792 were:

Countries that use the US dollar

The dollar is the currency of the United States. But maybe you didn’t know that it is also the currency adopted by many other countries. That is, these countries also issue dollar bills due to the monetary stability that introduces their value against other less stable local currencies.

This adoption phenomenon is known as “dollarization” and countries that have adopted it are: Ecuador, El Salvador, the Marshall Islands, Micronesia, Palau, the Turks and Caicos Islands (former Jamaican), the British Virgin Islands (British colony overseas east of Puerto Rico), East Timor or Zimbabwe. The first two since 2000.

For example, the old currency of Ecuador, the sucre, was supplanted by the US dollar on January 9, 2000 at an exchange rate of 25,000 sucres per dollar. In El Salvador, something similar happened also when the colon (SVC code, created in 1892) gradually disappeared from circulation in the country from 2001.

In all these cases, dollarization implies the recognition of the failure of the local monetary policy to fold to the stability of the monetary policy of the North American central bank, the Federal Reserve (FED).

The euro to dollar rate oscillates all the time and is usually around parity. If you search on Google for “Euro to dollar exchange” you will find dozens of websites that offer this “price” of the day. Even with Google Finance prices. Something like this (prices from the last 12 months to October 1st, 2019):

As you can see, the change last year has ranged between 1.10 and 1.14 dollars per euro (strong euro). But keep in mind that this graph represents the value of the “currency” dollar against the euro, and not that of the paper currency, which is lower (worse). In fact, in the exchange providers in Spain you can buy dollars today (10/1/2019) at an exchange rate of between 1,111 and 1,066 dollars for each euro, nothing to do with the exchange of euro-dollar currencies.

But keep this in mind:

-This price is a wholesale price of the dollar currency versus the euro currency (currency and currency are not the same);

-This price can only have the banks with each other, that is, it is impossible to get it as a private individual. If you need dollars in bills you will have to go through the retail ticket market (bank or exchange). This market means that dollars have had to be “transported” by someone for you to enjoy them.

-The dollar is a very common and abundant currency in Spain, so it is easy to find it available (it is always available for sale), since the exchange houses that receive tourists using the American currency, exchange it for euros When they visit us. Therefore exchange houses and banks have abundant stocks and dispose of the currency at reasonable exchange rates. But never agree to pay a commission for the currency exchange, in addition to a margin already included in the exchange rate that applies to you.

Where to change US dollars

The 3 most popular places to exchange dollars in Spain are banks, currency exchange providers and the airport. It could also be done from peer to peer, of course, but it is not worth it because, being Spain a country that receives about 80 million tourists a year, of which 20% North Americans, there are no problems with the supply of dollars.

If you are going to change in origin, in Spain, before traveling to the United States, Ecuador or any other “dollar” destination, the cheapest exchange houses to buy dollars (all collaborate with Cambiator exposing their prices in open and accepting the daily competition) are:

To know the euro-dollar exchange rate, the best thing you can do is use our currency comparator.