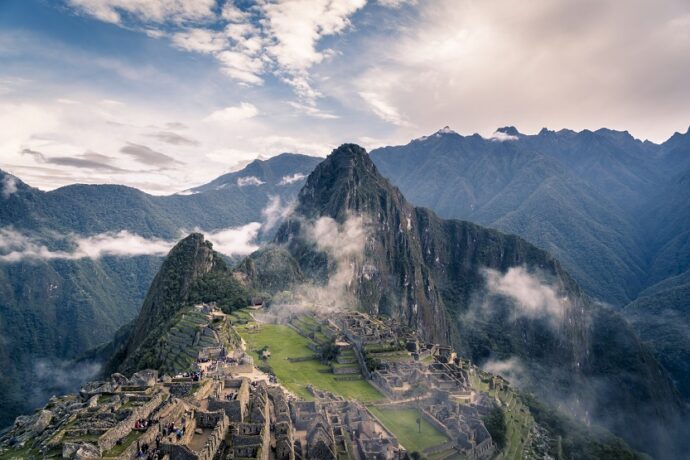 This blog post “Peruvian nuevo sol” was published first on the 25th of January 2020 and has been updated on the 1st of December 2022.

The Sol, also called Nuevo Sol, is the official currency of Peru since 1991. It is subdivided into 100 cents. Its ISO 4217 code is PEN and its symbol is S /, which is always written before the quantity. Sol in Spanish means sun, and nuevo means new. So, Nuevo sol, stands for “New Sun”.

History of the nuevo sol

The currency of Peru has been changing over time, and with each change, a new name came (golden sun, inti and new sun). In the twentieth century these have been the most recent changes by time period.

The issuance of banknotes and coins of nuevos soles is the responsibility of the Central Reserve Bank of Peru, based in the capital of the country, Lima.

The Sol or Nuevo Sol (S /) is divided into 100 cents (c). Currently, the following Nuevo Sol coins and their cents are in circulation:

The 10 and 20 cent coins are made of brass, while those of 50 cents and S / 1 are made with an alloy of copper, zinc and nickel called alpaca.

On the reverse of all Peruvian currencies the Coat of Arms of Peru is represented in the center next to the legend Central Reserve Bank of Peru and the year of issue. The obverse shows the face value of the coin, although the decorative motifs are varied. For example, in the 10 and 20 cent coins, designs found in the pre-Columbian citadel of Chan Chan are reproduced, in those of 50 cents and 1 Sun there is a stem of oak and laurel leaves.

On the other hand, the currencies of S / 2 and S / 5 are bimetallic. The outer ring is made of stainless steel, while in the inner disk, of copper, nickel and aluminum, emblematic figures of the Nazca Lines (the hummingbird and the frigate bird respectively) are represented. The value of the currency of S / 5 equals approximately a little more than one euro. 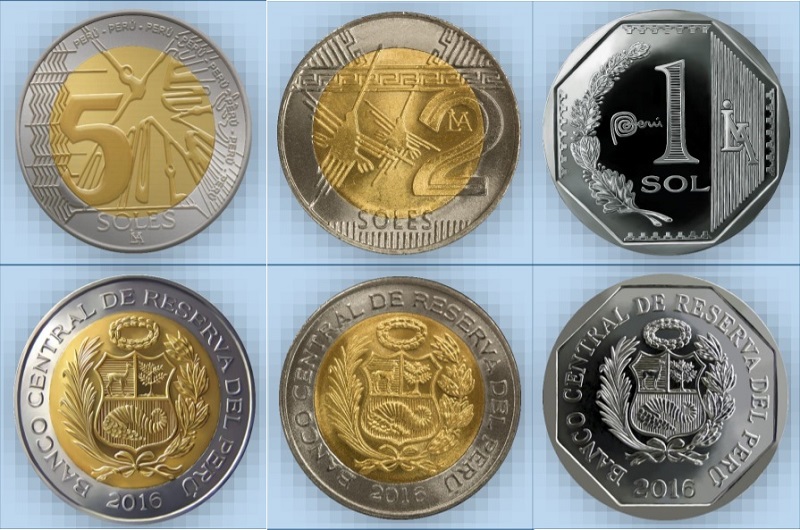 Coins of 1 cent of brass and aluminum were withdrawn from circulation in 2011. Nor are coins of 5 cents already minted, which, although still valid, are actually very scarce.

The values of these banknotes in circulation (in brackets their color) are:

These are the five banknotes of nuevos soles that are legally in circulation today:

The obverse of this banknote is dedicated to the Peruvian singer-songwriter María Isabel Granda y Larco (1920-1983), known by the artistic name of Chabuca Granda. Her musical style was the Creole and Afro-Peruvian song.

For its part, the reverse of this banknote is dedicated to the vicuña. Its originality lies in the fact that its rear design is vertical while the obverse is horizontal.

As of the date of this update (December 2022), for a 10 soles banknote you would get 2.12 euros in competitive currency suppliers in Spain.

On the obverse of this banknote appears the effigy of José Abelardo Quiñones Gonzales, a Peruvian aviator, declared a National Hero of Peru after immolating himself on an air mission against the enemy lines during the 1941 War.

On the reverse is the citadel of Machu Picchu, the most famous archaeological monument in the country, declared a World Heritage Site by UNESCO. The current exchange value of this note in Spain is about 2.50 euros.

The new 20 soles banknote issued in 2021 shows the portrait of the Peruvian poet, writer and professor José María Arguedas (1911-1969), one of the great writers of Peru. Arguedas dedicated great efforts to the translation and dissemination of Quechua literature.

The reverse shows a drawing of the condor, very common in the high coastal areas, together with the National Flower of Peru, the Cantuta flower. Like the 10 soles note, the design is also vertical on this reverse.

As of the date of this update (December 2022), for a 20 soles banknote you would get 4.24 euros in competitive currency suppliers in Spain.

Another Peruvian hero stars in the obverse of the 20 soles banknote: Mr Raúl Porras Barrenechea. Politician, historian, lawyer and diplomat, Porras was a key figure in the history of Peru in the twentieth century.

On the reverse is the Huaca del Dragon, a pre-Hispanic religious monument located in the citadel of Chan Chan. Its current exchange value in Spain is below 5 euros. 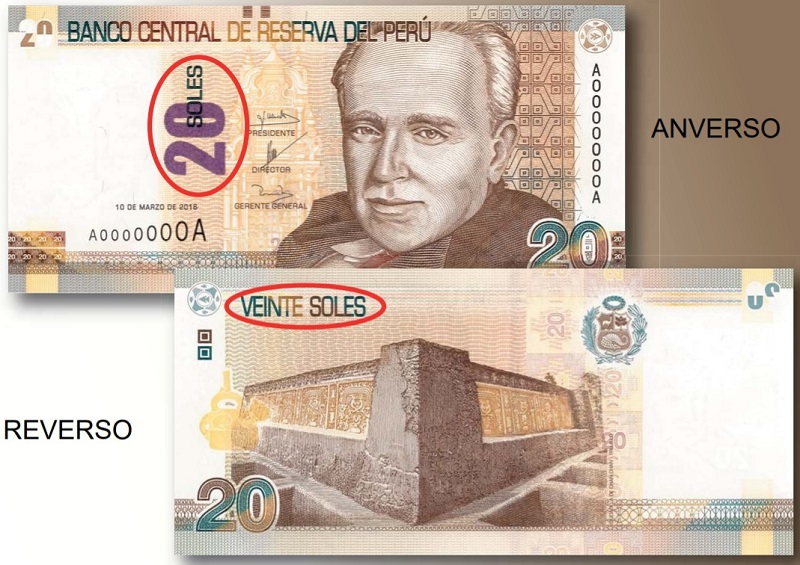 The first series of 20 nuevos soles notes was orange, a chromatic tone very similar to that of the 50 soles banknote, which is why they could be confused. For this reason, it was decided in the 2011 series to differentiate between the two banknotes, corresponding to the 20-soles brown color as in the image shown above.

The new 50 soles banknote shows the portrait of the Peruvian historian María Rostworowski Tovar de Diez Canseco (1915-2016), known for her study of the pre-Hispanic civilizations of Peru and the Inca Empire.

On the reverse, the jaguar stands out next to the Puya Raimondi.

The 50 soles red banknote presents the effigy of Abraham Valdelomar on the obverse, a leading figure in Peruvian literature.

On the reverse is the New Chavín de Huántar Temple. The counter value of this 50 soles banknote in Spain is approximately 12 euros.

The new 100 soles banknote of 2021 shows on its obverse the portrait of Pedro Paulet Mostajo (1874-1945) a precursor engineer of air navigation in Peru.

The reverse shows the Spoontail hummingbird, an endemic species of Peru.

The 100 soles note, whose value in Spain at currency providers is approximately 25 euros, is blue. The character that decorates its obverse is Jorge Basadre, Peruvian politician and intellectual of the twentieth century. On the reverse is an image of the Andean archeological site known as El Gran Patajén.

The 200 soles banknote is the only one that has not been reissued in the 2021 edition, so, in addition to being the highest value note that currently exists in Peru, its design has not changed and maintains that of 2009.

Its exchange value at currency suppliers in Spain today would be of around 50 euros.

It has an undefined color that varies between violet and green, depending on the incidence of light on its surface. The main figure on the obverse is the image of Santa Rosa de Lima, while on the reverse the Santo Domingo Convent is represented, in the capital of the country.

The euro to Peruvian Nuevo sol rate is quite stable, with moderate fluctuations. If you search on Google for “euro to peruvian nuevo sol” rate, you will find dozens of websites (“currency converters”) that offer a “price” of the day. You will also see this graph with the rates of that pair of Google Finance currencies.

As you can see, the exchange rate in recent years has fluctuated between 3.3 PEN and 4.1 PEN per euro. But we must bear in mind that this graph represents the value of the Peruvian currency against the euro, and not that of the real paper currency, which is lower.

In fact, in the currency exchange providers in Spain you can buy Peruvian soles at an exchange rate between 3.38 and 3.26 PEN for each euro depending on where you change your currency. Nothing to do with the currency euro to Peruvian sol rate.

So, when you see these values on Google and other currency converters with your mobile, you should keep in mind the following:

If you need Nuevos soles paper currency you will have to go through the retail banknote market (bank or currency provider). This market means that Peruvian soles have had to be “transported” by someone for you to enjoy them (or bought from travelers from Peru passing through Spain previously).

In other words, moving notes from one place to another has logistic costs that will make its selling price more expensive (the exchange rate that will be applied to you by the seller).

The Peruvian Nuevo Sol is not a very abundant currency in Spain. As a result of its shortage, its price is more expensive in Spain than in Peru. If you decide to buy nuevos soles in Spain, it is good to anticipate the purchase and order them online to get better rates.

To know the Euro to Peruvian Nuevo Sol exchange rate, the best thing you can do is use our currency comparator.

Where to exchange Peruvian nuevo soles in Spain

The three most popular places to change nuevos soles in Spain are banks, currency providers and the airport.

Of these, the least recommended place to buy is the airport and any business that charges you a commission in addition to a “margin rate” (difference between the price for which they paid the currency and the price they sell it to you).