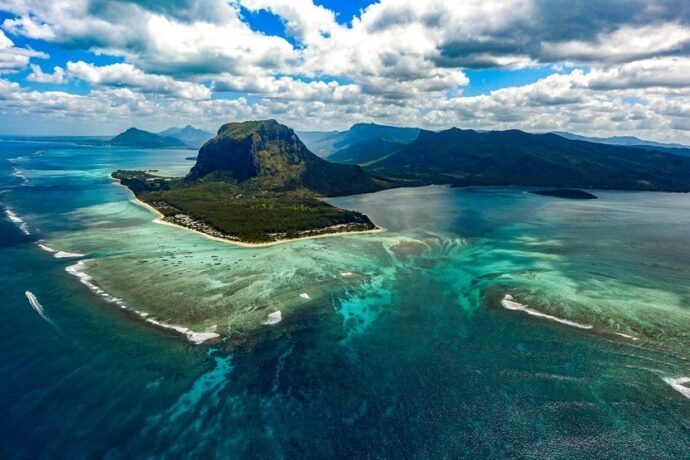 The Mauritian Rupee is the official currency of Mauritius. Its ISO 4217 code is MUR and its symbol is Rp. or Rs, written before the amount (for example Rs500). The Mauritian rupee is divided into 100 cents.

History of the Mauritian rupee

Mauritius is an island country, in the Indian Ocean, east of Madagascar, in the shape of a republic and a population of 1.2 million inhabitants. In English it is known as Republic of Mauritius and in French as République de Maurice.

It is known for the excellence of its beaches and for its mountainous interior, with the Black River Gorges National Park as a faithful representative of the tropical forest. Its capital is Port Louis and has a place to see Mauritius as the racecourse or botanical garden of Sir Seewoosagur Ramgoolam. Mauritius became independent from the United Kingdom on March 12, 1968 and a few years later, that same day, took the form of a Republic (March 12, 1992).

In addition to the island of Mauritius, the republic includes the islands of Saint Brandon (Cargados Carajos), Rodrigues and the Agalega Islands. Mauricio is part of the Mascareñas Islands, next to the French island of Reunion, about 170 kilometers southwest.

In the middle ages, Mauritius was a mooring point for Arab and Malaysian sailors who knew it under the name of Dina Arobi. But it is in 1507 when the Portuguese sailor Pedro de Mascarenhas arrives at the island, giving it the name of Cirne in the first Portuguese maps (hence the name of Mascareñas islands given to the archipelago of Mauritius and Reunion islands).

But the first to take possession and settle on the island were the Dutch in 1598. The new settlers called it Mauritius in honor of Prince Mauritius of Nassau of the Netherlands. But they abandoned it because of constant weather difficulties. Moment that the French took advantage of to turn it into a French colony under the name of Île de France (although it was ceded to the English in December 1810 after the defeat of Napoleon). Under British rule the name of the island was again the original of Mauritius .

In its early years it was also the usual currency in the Seychelles, until this country issued its own rupee in 1914.

The Bank of Mauritius (BOM), is the central bank of the Republic of Mauritius, responsible for promoting and maintaining monetary and financial stability. One of its functions is to regulate the issuance of rupee coins and bills in the country.

In 1999, the last series of bills with renewed designs entered into force. And on August 22, 2013, the Bank of Mauritius announced the introduction of new polymer banknotes with the denominations Rs25, Rs50 and Rs500 for reasons of safety and durability against paper rupee bills.

The new polymer banknotes maintain virtually the same design as their 1999 paper counterparts, although they incorporate more security. Among the new security features include a transparent window with the image of the “dodo” bird, numbers printed with magnetic ink that become fluorescent under ultraviolet light and oscillation characteristics printed in iridescent ink, which change to a different color when observed in transparency or when the bill is tilted.

With the arrival of these new polymer banknotes (2013), the BOM is working on the definitive replacement of its denomination counterparts made of paper (1999), which will end up being withdrawn from circulation, and which remain legal tender.

The 25 MUR banknote is violet. It was first issued on June 30, 1999, but on August 22, 2013, a new polymer edition of this bill was issued. Both are currently in circulation as legal tender.

It shows on the obverse the portrait of Mauritian politician Sir Jean Moi Lin Ah-Chuen (1911-1991).

On the reverse we can see the autonomous island of Rodriguez on the reverse. The equivalence of this 25 rupee bill would be today in currency suppliers in Spain of about 56 cents.

The obverse shows the portrait of Mr Joseph Maurice Paturau on the obverse. Paturau (1916-1996) was a native of the Island and of French nationality, a prominent fighter from World War II (Croix de Guerre with 342 Lorraine Squadron and Commander of the Order of the British Empire (CBE)). Behind you can see the facade of the former Bank of Mauritius and a representation of Justice, blindfolded holding a scale and a sword.

Once the war was over, Paturau returned to Mauritius where between 1947 and 1962, he was CEO of Forges Tardieu in Port-Louis and a member of the Chamber of Agriculture. Between October 1962 and until July 1966 he was Minister of Industry and Commerce of the Government of Mauritius. He was also president and director of the Office of Economic Coordination of the private sector in Port-Louis.

The shopping center of Le Caudan Waterfall is seen on the back. It is a center for shopping in the area, among colorful umbrellas hanging to shade, images of dodos and native flowers and water channels. It has a casino, central market and a craft complex called Craft Market.

The equivalent of this 50 rupee banknote would be today in currency suppliers in Spain of 1.12 euros.

Gray banknote that was released on June 30, 1999. It shows the portrait of Mr Renganaden Seeneevassen on the front. Seeneevassen (1910-1958) was the first education minister of the island and one of the parents of the constitution of Mauritius.

The reverse side shows the Court House of Port Louis, seat of the courts of justice. The equivalence of this 100 rupee bill would be today in cuurency providers in Spain of 2.24 euros.

Banknote of greenish tones that came to light on June 30, 1999. It has the image of Sir Abdool Razack Mohamed (1906-1978) on the obverse. Mohamed, born in India, was former key minister of Mauritius before and after the independence of the island. He is considered one of the parents of the modern state of Mauritius. And he is also owed the colors of the Mauritius flag.

The reverse shows the central market of Port Louis in full activity. The equivalence of this 200 rupee bill would be today in currency providers in Spain of 4.50 euros.

This banknote was released on June 30, 1999 and is coloured brown. On August 22, 2013, a new polymer edition of this bill was issued. Both are in circulation as legal tender.

The note shows the image of Mr Sookdeo Bissoondoyal (1908-1977) on the obverse. Bissoondoyal was a key politician at the Constitutional Conference in London that led to the independence of Mauritius in 1968.

The University of Mauritius can be seen on the reverse. It is the largest university in the country by students enrolled and subjects taught. The main campus of this public university is in Moka, Réduit.

The equivalence of this 500 rupee bill would be today in currency providers in Spain of 11.30 euros.

Duval was a lawyer, statesman and politician of Mauritius, leader of the Parti Mauricien Social Démocrate (PMSD), in favor of the integration of Mauritius into the United Kingdom. He led the conservative movement against independence, which was mainly supported by white oligarchs and the majority of the Creole community, who feared Hindus.

On the reverse you can see the official residence of the President of Mauritius, the State Chateau in Reduit. The equivalence of this 1000 rupee banknote would be today in currency providers in Spain of 22.60 euros.

Banknote of reddish colors that came to light on June 30, 1999. It has the portrait of Sir Seewoosagur Ramgoolam KCMG, (1900-1985), known as the father of the nation (“Father of the Nation”) on the obverse. of Mauritius, between 1961 and 1968, Ramgoolam was Chief Minister of British Mauritius, when the territory was a colony of the British crown, being the only person to hold the position.

The reverse shows a man with ox cart carrying sugarcane, cultivation of the island. The equivalence of this 2000 rupee banknote would be today in currency providers in Spain of 45.20 euros.

-These rates you see are usually wholesale prices of the rupee against the euro currency;

-This rates can only be accessed by banks operating with each other. That is, it is impossible to get them as individuals;

If you need rupees in banknotes you will have to go through the retail banknote market (bank or exchange provider). This market means that the rupees have had to be “transported” by someone so that you can enjoy them (or bought from travelers coming from Mauritius, passing through Spain previously). In other words, moving paper money from one place to another has logistic costs that will make their selling price more expensive (the exchange rate that will be applied to you by the seller).

-The Mauritius rupee is a scarce currency in Spain, so it is not so easy to find it available for sale. Therefore it is good to anticipate the purchase and order it online to get a better price.

Where to exchange Mauritian rupees today

The best way to change Mauritian Rupees to Euros or vice-versa in Spain is at high-street currency providers or at airports since Spanish banks (BBVA, Santander, Caixa, etc.) do not usually offer it. But you have to be attentive to the possible collection of a commission or very high exchange prices, taking advantage of its scarcity and your need (especially in the airports of Madrid T4 and El Prat in Barcelona). Keep that in mind.

To know the Euro to Mauritian rupee exchange rate today in Spain and buy or sell rupees at a fair price, you can use our currency comparator.