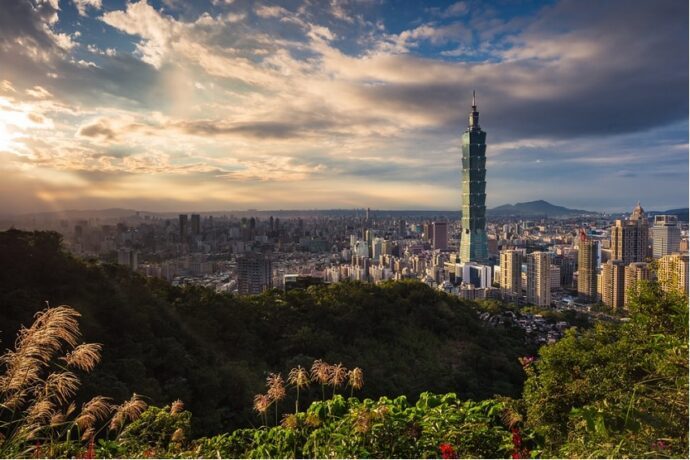 The Taiwan dollar is the official currency of Taiwan, as well as the territories under Taiwanese sovereignty of Pratas, Pescadores Islands, Matsu and Kinmen. Its ISO 4217 code is TWD and its symbol is $ or NT $. The Taiwanese dollar can also be known as the new Taiwanese dollar and is divided into 100 cents. As of October 2019, the equivalence of the Taiwanese dollar currency against the euro is 1 euro = 33.89 TWD.

History of the Taiwan dollar

Taiwan is an island state 180 km East of China. Its surface may be small, but it has modern cities with traditional Chinese temples and outstanding tourist facilities. Its capital Taipei is north of the island and has great nightly commercial activity. If you go to Taipei do not miss the Taipei 101, a 509 m high skyscraper in the shape of a bamboo stalk, with an impressive viewpoint at the top. 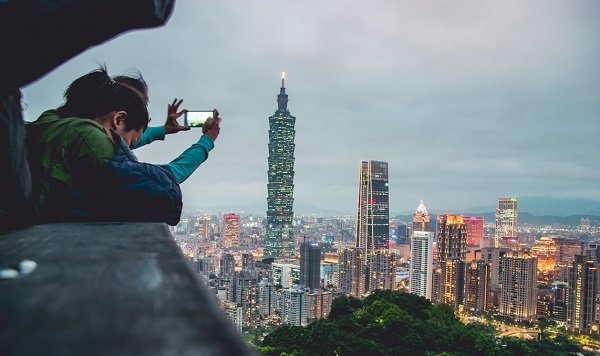 Taipei 101 as seen from another skyscraper (Taipei – Taiwan)

In 1946, the national currency of the Republic of China was the silver dollar, but in an effort to stabilize regional finances, the Bank of Taiwan was authorized to issue the Taiwan dollar (now known as the old Taiwan dollar) to be used exclusively in its territory.

The new Taiwanese dollar we know today was first issued in June 1949. It replaced the old Taiwanese dollar at an exchange rate of 40,000 old dollars for a new dollar. The objective of this monetary reform was to end the hyperinflation suffered in Taiwan and China after the Chinese Civil War (1927-1949).

In July 1961, the Chinese Central Bank began operations in Taiwan, entrusting the Bank of Taiwan with the task of issuing banknotes. But the Taiwanese dollar was not recognized as official currency until January 2000, since, until then, it was assumed that the official currency in Taiwan was the Chinese yuan. From that moment, the Central Bank of the Republic of China (Central Bank of the Republic of China) began issuing new Taiwan dollar bills that replaced the previous ones, which were withdrawn from circulation.

Finally, in July 2000, the Central Bank issued the new series of banknotes (the current one) with an inscription that cites the issuing bank as the “Central Bank” instead of the “Bank of Taiwan.” New regulations were formulated (“Regulations governing the entrustment to the Bank of Taiwan of matters associated with the issuance of the new Taiwan dollar by the Central Bank of the Republic of China (Taiwan)”) and related matters continued to be entrusted to the Bank from Taiwan

The Taiwan dollar has coins of ½ dollar, 1 dollar, 5 dollars and 10 dollars of the issuance of the year 1981. Other higher value currencies such as 20 and 50 dollars have subsequent issues, of the years 2001 and 2002 respectively. All Taiwanese coins have a circular shape and include on the obverse the year of minting according to the Minguo calendar.

The Taiwan dollar banknotes currently in circulation are those issued in the fifth series of 1999. They have the following denominations:

The 100 dollar bill is red. On the obverse it shows the portrait of Sun Yat-sen, politician, statesman and Chinese ideologist. He was the first president of the Republic of China and founder of the Kuomintang. He is considered the father of modern China. On the back it shows the Chung-Shan building located in the Yangmingshan National Park in Taipei.

The $ 200 is a greenback. The obverse shows the portrait of Chiag Kai-shek (Jiang Jieshi). This was a top Chinese military and statesman of the Republic of China founded in Nanjing in 1927. On the reverse you can see the Presidential Palace in Taipei.

The 500-dollar banknote from Taiwan is brown. It shows an image of young people playing baseball on the obverse and a Sica deer on Mount Dabajian on the reverse.

The $ 1000 is a blue banknote with an image of students on the front. On the reverse there is an image of Mount Yu Shan and the Pheasants of Mikado.

This 2000 TWD banknote is violet. On the obverse, it shows the FORMOSAT-1 satellite placed in orbit in 1999 as an observation satellite for Earth, ionosphere and oceans. It is operated by the Office of the National Space Program of the Republic of China. On the reverse you can see Mount Nanhu and two Formosa salmons.

But we must bear in mind that this graph represents the value of the “currency” of the Taiwanese dollar against the euro, and not that of the real paper currency, which is lower. In fact, in the currency exchange providers in Spain you can buy Taiwan dollars today at an exchange rate of around TWD 31 for each euro, at best. Nothing to do with the Taiwanese euro-dollar currency exchange.

So, when you see these values ​​on Google and other currency converters with your mobile, you should keep in mind the following:

-It is an unofficial price, and therefore unreliable. That is, if you click on the “Disclaimer” link, you get this Google Finance warning:

-These prices you see are usually wholesale prices of the Taiwanese dollar currency versus the euro currency (currency and paper currency are not the same).

-This price can only have the banks with each other, that is, it is impossible to get it as a private individual. It is what is known interbank exchange rate.

If you need Taiwan dollars in banknotes you will have to go through the retail banknote market (banks or foreign currency providers). This market means that the dinars have had to be “transported” by someone for you to enjoy them (or bought from travelers from Taiwan passing through Spain previously). In other words, moving tickets from one place to another has logistic costs that will make its selling price more expensive (the exchange rate that will be applied to you by the seller).

The Taiwanese dollar is a currency / currency quite difficult to obtain in our country. In any case, its price is usually more expensive in Spain than in Taiwan. If you decide to buy TWD in Spain, it is good to anticipate the purchase and order them online to get a better price.

Where to change Taiwanese dollars in Spain

High street banks, airports and currency exchange providers are the most common places to exchange Taiwanese dollars for euros or vice versa in Spain. While it is advisable to avoid airports by charging abusive exchange margins (no matter how much they advertise “no commission”).

To know the euro to Taiwanese dollar (or vice-versa) exchange rate today in Spain, you just have to use our currency comparator, whether you want to buy Taiwan dollars (EUR-TWD) or if you want to sell them in exchange for euros (TWD-EUR).