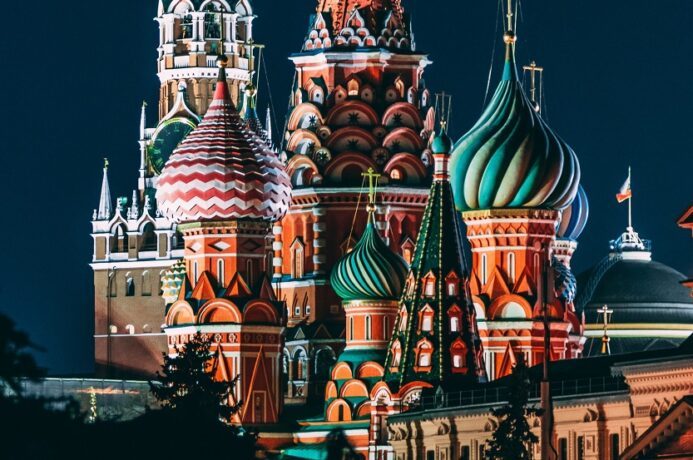 The Russian ruble is the official currency of the Russian Federation. It is also used in the Republic of Abkhazia, Belarus and South Ossetia. Its symbol is ₽ or руб colloquially and its ISO code 4217 is RUB.

History of the Russian ruble

The Russian ruble has been the currency in Russia since the thirteenth century. In 1704, Tsar Peter I (the Great) introduced the first regular coinage of the silver ruble. During the eighteenth century this currency was devalued and, after the mid-nineteenth century, paper money circulating in Russia quickly depreciated.

In 1897 the ruble adopts the gold standard, leaving the silver ruble. At the beginning of the First World War, gold coins disappeared from circulation and banknotes became non-convertible. During the period of the Russian Revolution and the civil war, Russia’s high inflation left the ruble virtually worthless.

Subsequently, after the reform during the years 1922 and 1923 the orderly monetary system was restored. The “chervonets” were introduced as the standard unit and the basis for issuing banknotes by the state bank. The chervonet ruble corresponded to the tenth part of the chervonets.

In the 1947 reform, after World War II, chervonets were abandoned as the monetary standard and the ruble were restored.

Today, the predecessor of Gosbank, the Central Bank of Russia (in English, Central Bank of the Russian Federation), has on its website a section dedicated to the coins and ruble banknotes (and also the kopecks).

Currencies of the following denominations are currently in circulation in Russia (in kopeks and in rubles):

These kopek coins represent St. George killing the dragon with a spear.

They have a very low value for those who handle euros (1 cent of the euro would be equivalent to the change at 65 kopecks). Therefore, those of 1 and 5 kopeks are rarely used and it is planned to stop minting them.

All rubles coins represent the emblem of the Bank of Russia, the double-headed eagle. These currencies have a very low value for people who handle euros, pounds or dollars. For example, the currency of 10 rubles would equal the change to 15 euro cents.

The 5-ruble banknote is green and almost no longer circulates because it has been replaced by the 5-ruble coin. This is a version in his last impression of 1997.

The “Millennium of Russia” monument and the Sofia Cathedral in Novgorod are depicted on the front of the note. On the back of the bill is the fortress wall of the Novgorod Kremlin. 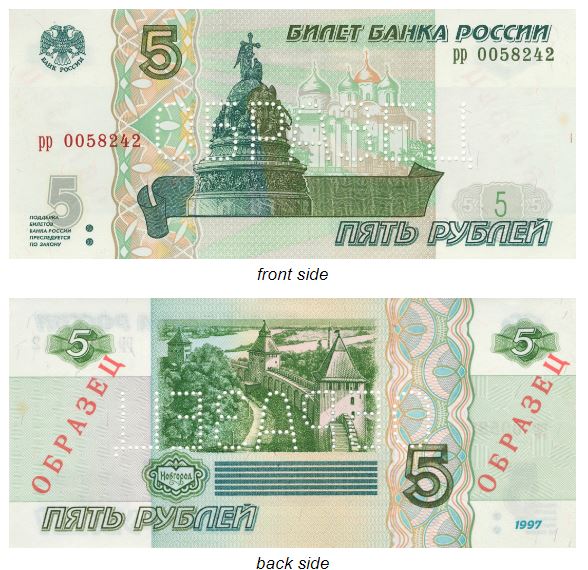 The same goes for the 10 RUB banknote, which is colloquially known as “chervonet”. This note, of ocher color, has been in circulation since August 16, 2004. The one shown below is a modification of the first edition of 1997 and has dimensions of 150 x 65 mm.

On the obverse of the banknote appears the bridge over the Yenisei River and a chapel in Krasnoyarsk. On the back is the dam of the Krasnoyarsk hydroelectric station. 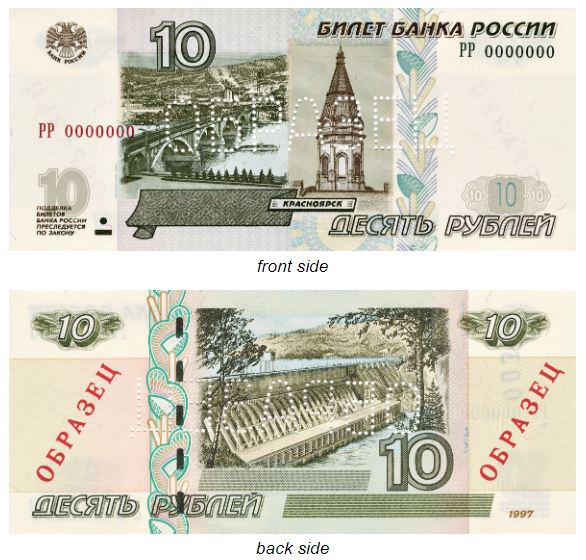 The value in euros of this 50 rubles note would be about 0.70 euros today. 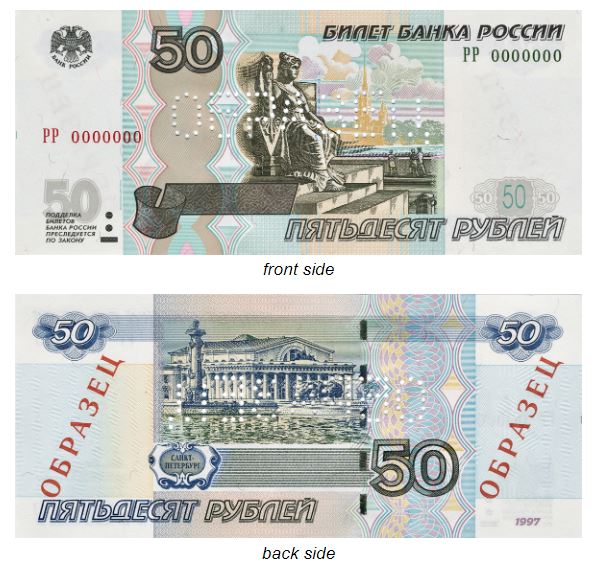 The one hundred ruble note dates from 1997 but has undergone several modifications. The last one on May 22, 2018, on the occasion of the 2018 Russia World Cup. It measures 150 x 65 mm and has a vertical orientation.

In its obverse it shows a boy with a ball under his arm and a goalkeeper stretching for a ball. On the reverse appears a soccer ball as a symbol of the world and football fans. In addition, the 2018 number that marks the theme of the ticket and the FIFA Russia World Cup 2018 appears.

The value in euros of this 100 rubles note would be about 1.5 euros today. 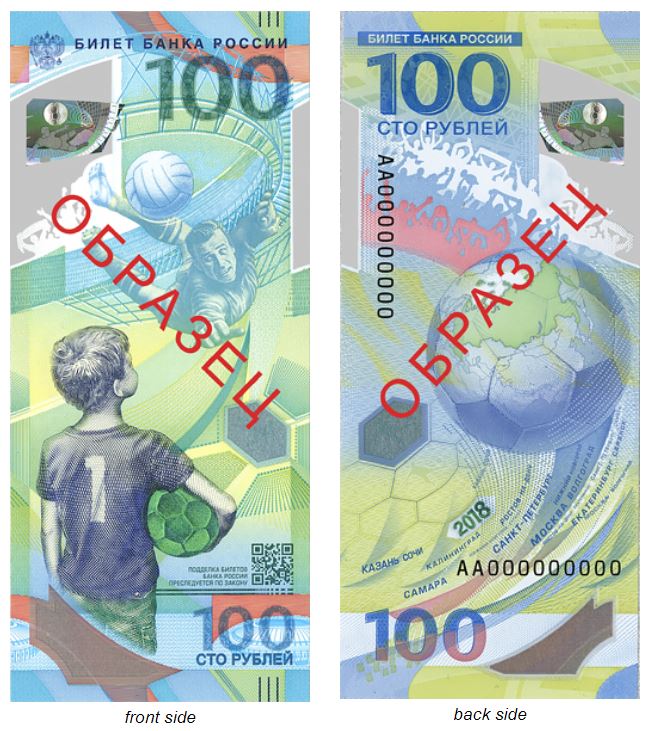 The two hundred rubles note is the youngest of all. Its only issue dates from October 12, 2017 and measures 150 x 65 mm like the other bills. It is green and on the obverse shows the Monument to the sunken ships in Sevastopol. The reverse features the Tauric Chersonese State Reserve Museum.

The value in euros of this 200 rubles banknote would be about 3 euros today. 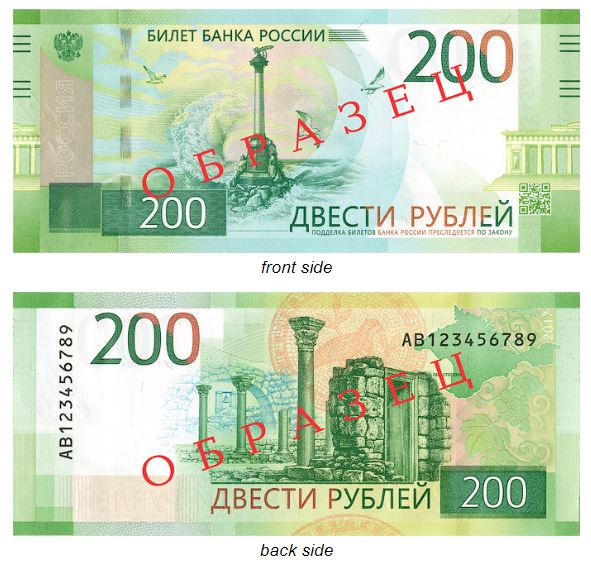 The five hundred rubles banknote is violet and blue and began to circulate in January 1998. There have been several editions, of which the most recent is that of 2010, in circulation since September 6, 2011. It measures 150 x 65 mm

The obverse of the ticket shows the monument to Peter the Great and a sailboat in the port of Arkhangelsk. On the back of the ticket appears the Solovetsky monastery.

The value in euros of this 500 rubles bill would be about 7 euros today. 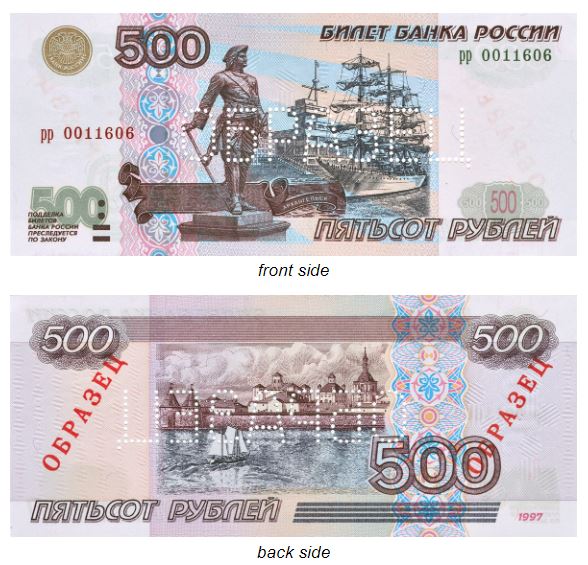 The thousand-ruble bill is greenish in color and was first printed in 1997. Afterwards there have been several issues essentially maintaining the design and dimensions 157 x 69 mm. The last emission dates from August 10, 2010.

The obverse of the note represents the monument to Prince Yaroslav the Wise and a chapel with the Yaroslavl Kremlin in the background. On the back of the bill you can see the Bell Tower and the Church of John the Precursor in Yaroslavl.

The value in euros of this 1000 rubles note would be about 14 euros today. 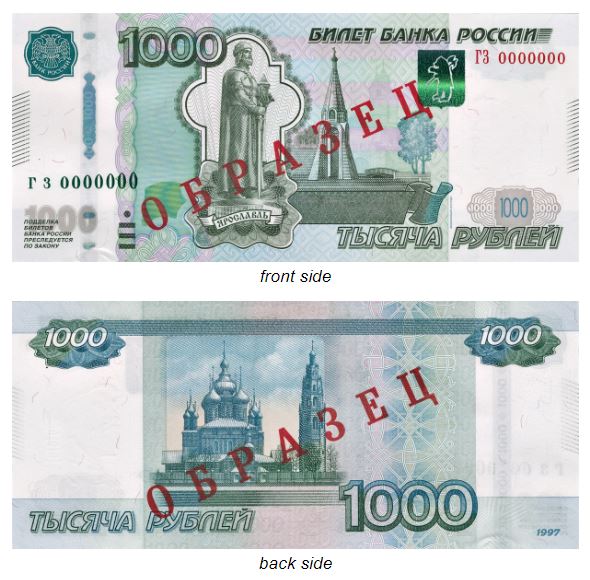 The banknote of two thousand rubles is blue and its only series was put into circulation on October 12, 2017. It has dimensions of 157 x 69 mm.

The obverse of the bill shows the Russky bridge in Vladivostok that connects Russky Island with the mainland. The reverse features the Vostochny Cosmodrome. A QR code on the front can be scanned with a QR reader that takes you to the Central Bank website, where the security measures of this banknote are explained.

The value in euros of this 2000 rubles bill would be about 28 euros today. 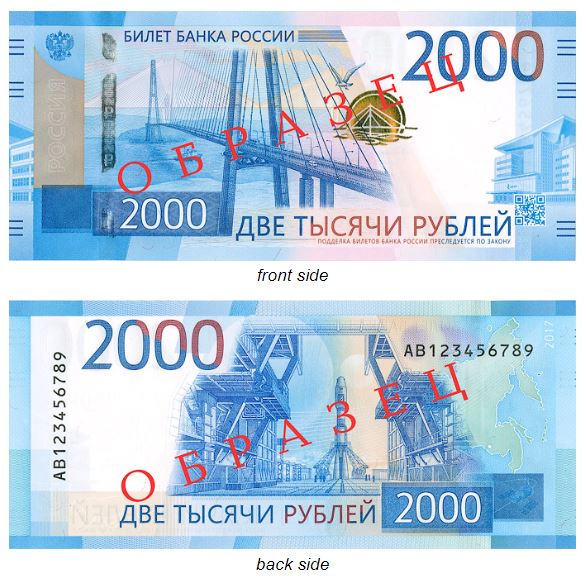 The five thousand rubles banknote is reddish in color and was put into circulation on July 31, 2006, with dimensions of 157 x 69 mm. The second and final series of this ticket is that of 2010.

The obverse of the bill represents the monument to N.N. Muravjov-Amursky and the embankment in Khabarovsk. On the back of the note is the bridge over the Amur river in Khabarovsk.

The value in euros of this 5000 rubles banknote would be about 70 euros today. 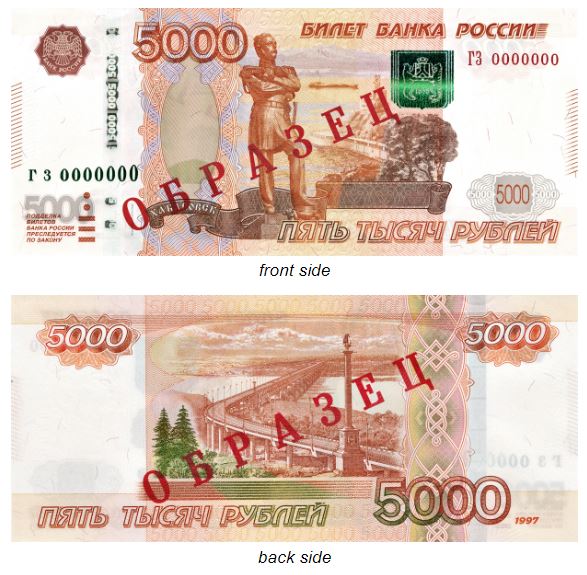 The exchange rate of the euro with respect to the ruble oscillates at all times. Specially now that there is a conflict between Russian and Ukrain.

If you search Google for “Euro to Ruble exchange rate”, you will find dozens of websites (“currency converters”) that offer a “rate” of the day. You will also see this graph with the prices of that pair of Google Finance currencies. Something like that (July 7, 2022):

But keep in mind that this graph represents the value of the “currency” Russian ruble against the euro, and not that of the real paper currency , which is lower.

In fact, in the currency providers in Spain you can buy “rubles” at an exchange rate of 64 RUB, for every euro. Nothing to do with the euro to ruble currency exchange.

-These prices you see are usually wholesale prices of the Russian ruble currency against the euro currency (currency and currency are not the same);

-This price can only be held by the banks (interbank market), that is, it is impossible to achieve it as a private individual.

If you need paper rubles you will have to go through the retail ticket market (bank or currency supplier). This market means that the ruble has had to be “transported” by someone for you to enjoy them (or bought from travelers from Russia, passing through Spain previously). In other words, moving paper notes from one place to another has logistic costs that will make its selling price more expensive (the exchange rate that will be applied to you by the seller).

-The Russian ruble is a currency / currency not very abundant in Spain. Therefore it is not easy to find it available for sale in the currency suppliers. So it is good to anticipate the purchase and order them online to get a better price.

Where to buy or sell Russian rubles in Spain (banknotes)

The 3 most popular places to exchange rubles (RUB) in Spain are banks, currency suppliers and the airport.

To know the euro to ruble exchange rate at currency suppliers, banks and the airport, in Spain, the best thing you can do is use our currency comparison engine which is free of use.

Click on the link of your interest as you want to buy rubles or sell them in exchange for euros and you will see where to get the best online rates or in your city os stay (Madrid, Barcelona, Alicante, Valencia, Seville, etc.):

If what you want is to make an international transfer of euros to rubles or vice versa, then you will really be making a currency exchange and not a banknote currency exchange. In this case, the operation is different. Money does not move physically in banknotes. In this case what is transferred is balance between bank accounts expressed in different denominations: euros and rubles in this case.

First of all, ask your bank what it will charge you for a currency transfer from your account in euros to another account in Russia (we assume) in rubles. And apply the exchange rate to the amount sent and subtract the commission from the bank. This will give you a final amount in rubles to be received by the recipient of your euro to rubles transfer.

And then compare that price and the final rubles that reach the recipient of the transfer with the price of a couple of companies specialized in currency transfers such as Currencies Direct, which collaborate with Cambiator with adjusted prices.

Therefore, we recommend clicking on our menu in the Transfers tab and simulating prices with Currencies Direct before making the transfer with your usual bank.