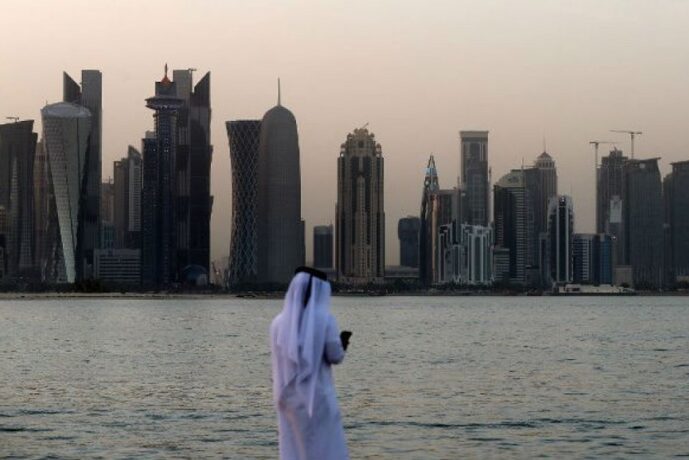 The Qatar riyal is the official currency of Qatar since 1966. Its ISO 4217 code is QAR and its symbol is QR or ر.ق in Arabic. The Qatari riyal is divided into 100 dirhams.

As of January 2020, the equivalence of the Qatari riyal currency against the euro is 1 euro = 4.06 Qatari riyals. Therefore, a riyal would be equivalent to about 25 Euro cents, rounding.

History of the Qatar riyal

The history of the currency of Qatar is tremendously conditioned by the beginning of the petrol activity of the Arabian peninsula in the 1940s.

Before the discovery of petrol, the economy of the Qatar peninsula depended on fishing and the cultivation of pearls whiche were traded with all kinds of foreign merchants. For this reason, between the 18th and 19th centuries, Spanish, French, Austrian and Indian rupees circulated in Qatar. For its acceptance as an exchange currency, the authorities marked these foreign currencies with a circular mark inside which a goat was seen and the Arabic inscription of “Qatar”.

The Qatari riyal was officially born in 1966, since until then Qatar had used the Gulf rupee as its currency (it was the official currency between 1959 and 1966). The Gulf rupee was devalued by the situation of political and economic unrest of its issuing country, India, between 1965 and 1966, so Qatar had to temporarily shift to the Saudi riyal until the Qatari riyal finally came to light in 1966

Between 1966 and 1973, the new currency, the Qatari riyal, was used both in Qatar and in Dubai. To this end, its equivalence was fixed at par with the Gulf rupee before its devaluation.

But the Qatari riyal ceased to be the currency of Dubai when it was incorporated into the United Arab Emirates (UAE) that have its own currency, the dirham, in 1973. Therefore, currently the riyal is only the currency in circulation of Qatar since 1973.

Qatar’s monetary policy agency is Qatar Central Bank (QCB), which has a section dedicated to riyal coins and banknotes on its website.

The current coins of the Qatari riyal are the same as those designed in the foundation and entry into force of the currency in 1966.

The Qatari riyal has coins of 1, 5, 10, 25 and 50 dirhams that only underwent a change in 1973 so that only the name of Qatar appeared, suppressing their Dubai landmark, after the country abandoned the riyal for the United Arab Emirates dirham.

Below are some images of these coins (beware that their size is not proportional to each other). 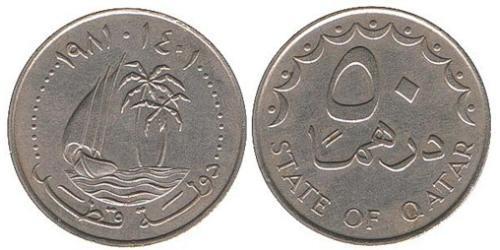 When the Qatar currency was created in 1966, bills of 1, 5, 10, 25 and 50 riyals were created that have subsequently undergone modifications throughout successive editions or series.

From the beginning there have been 4 series of banknotes of which the last, the fourth, in force, dates from 2008. This last series, currently in force has renewed designs and colors.

All the banknotes of the fourth series share the same obverse for all the notes, with the arch and the coat of arms of Qatar. Qatari riyal banknotes in circulation in 2020 have the following denominations: 1, 5, 10, 50, 100 and 500 riyals.

Blue banknote with a bird image on the reverse. The equivalent in euros of the 1 riyal bill would be about 25 Euro cents.

Green note with an image on the back of a dromedary next to some Oryx antelopes, typical of the Qatari landscapes. The equivalent in euros of the 5 Qatar riyal banknote would be approximately 1.25 euros.

Brown banknote with an image of a dhow and the desert on the reverse. The dhow (داو) is a sailing ship original of the Arabian peninsula. It has a triangular sail in its only mast, although there may be dhows of 2 and three masts, each equipped with its corresponding sail.

The equivalence in euros of the 10 riyal banknote would be approximately 2.50 euros.

Pink note dedicated to the Doha Pearl Monument on the reverse, located on the main avenue of the capital of Qatar, The Corniche. It commemorates the pearl industry, the most important activity in the country previous to the discovery of oil and gas fields.

The equivalent in euros of the 50 riyal note would be approximately 12.50 euros.

Green and violet banknote with an image of the great mosque of Doha (State Grand Mosque) on the back. The equivalent in euros of the 100 riyal banknote would be approximately 25 euros.

Blue banknote with an image of the Qatar parliament building in Doha (Diwan) and a hawk on the reverse. The equivalence in euros of the 500 riyal bill would be approximately 125 euros.

The Euro to Qatar riyal exchange rate has not undergone major variations in recent years, staying in the environment of the 4 riyals per euro, above or below. At the date of this post (January 2020), the Euro to Riyal exchange rate is € 1 = 4.06 QR.

As you can see, since the beginning of 2019 the exchange rate has remained very stable between 3.9 and 4.2 Riyales per euro. But keep in mind that this graph represents the value of the “currency” riyal against the euro, and not that of the currency, which is lower. In fact, in the exchange houses in Spain you can buy Qatari riyales at an exchange rate of 3.6 riyales for each euro, nothing to do with the currency exchange euro riyal (4.06 riyales per euro).

-These rates you see are usually wholesale prices of the Qatari Riyal currency against the Euro currency (currency and paper money currency are not the same);

-This rate can only be accessed by banks. That is, it is impossible to get it as a private individual

If you need riyal banknotes you will have to go through the retail banknote market (bank or currency provider). This market means that Qatari riyals have had to be “transported” by someone for you to enjoy them (or bought from Qatari tourists or professionals passing through Spain previously). In other words, moving banknotes from one place to another has logistic costs that will make their selling price more expensive (the exchange rate that will be applied to you by the seller).

-The Qatari riyal is a very scarce currency in Spain, so it is not easy to find it available for sale. Therefore it is good to anticipate the purchase and order it online to get a better price.

Where to exchange Qatar riyals in Spain

In Spain, you can buy or sell Qatari riyals in currency providers, high street banks and at airports.

The differences between comparing prices or not doing so are amazing. For example, for 1000 euros the best currency supplier in Cambiator would give you 3,710 riyals today while your bank, with the 3% commission they will apply to the previous amount (30 euros), 3,435 riyals. That is, 275 riyals less.

That is why it is important to avoid those places, such as banks and some abusive currency providers at airports and city centers, where they charge you commissions as well as a “margin”.

None of the currency providers that collaborate with Cambiator charge you commissions and they also have very competitive prices.