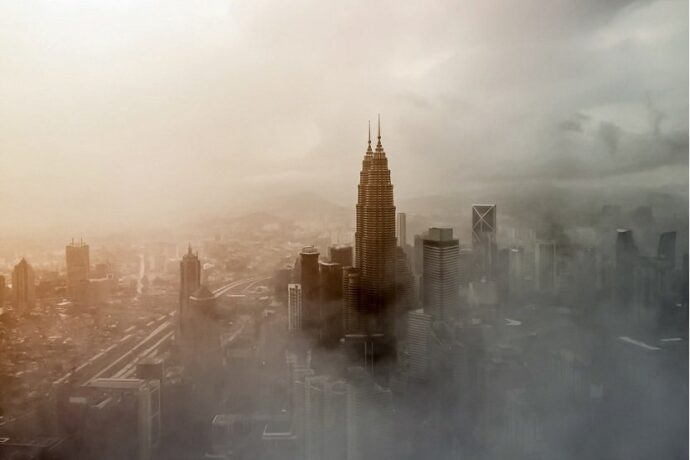 History of the Malaysian ringgit

The dollar of the Federation of Malaysia and Borneo was the official currency of the country until 1967, the year in which it was replaced by the Malaysian dollar. Malaysia had an agreement with Singapore and Borneo so that their currencies had the same value, but the country left that agreement behind in 1973.

Already in 1993 the Malaysian currency abandoned the dollar symbology and adopted the current RM symbol, which remains until today. 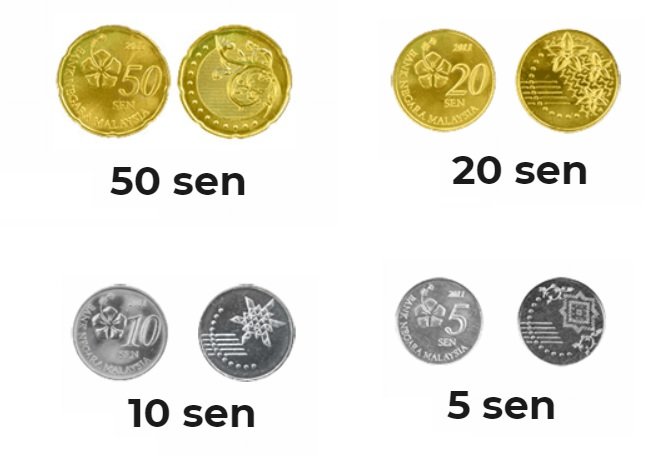 All these coins in circulation have on the obverse the same image of a hibiscus flower but they change on the cross. The coin of 5 sen shows the weaning follow. The coin of 10 sen a floral ornament of the Mah Meri tribe. The coin of 20 sen shows jasmine flowers and the coin of 50 sen shows a tendril of peas.

Its countervalue in euros is really ridiculous if we consider that 1 ringgit would be equivalent today to about 22 euro cents.

The current series of ringgit tickets is the fourth, dating from July 2009 (RM50) and June 2012 (RM100, RM20, RM10, RM5 and RM1). They are printed by the central bank of Malaysia, in English, Bank Negara Malaysia (BNM) which is also responsible for minting the Malaysian coins.

Below we see images of the current Malaysian ringgit tickets. These tickets are of the following denominations:

They all have in common to show on their obverse the portrait of Tuanku Abdul Rahman (Abdul Rahman of Negeri Sembilan), who reigned in the country between August 31, 1957 and April 1, 1960.

This is a bluish banknote protraying Tuanku Abdul Rahman on the front and a wau bulan on the back. The fourth series dates from June 2012.

The 1 ringgit (RM1) banknote is dedicated to the popular traditional sport in Malaysia, flying kites. This hobby is traditionally a celebration of a good harvest that brings together local communities in the states of Kelantan and Terengganu. Among the best-known and most iconic Malaysian kites is the ‘Wau Bulan’ or Moon Kite, which is presented in the 2102 fourth series of the RM1. The Wau Bulan, which is handmade with bamboo and paper, is also a popular decorative item that adorns the walls of Malaysian houses. 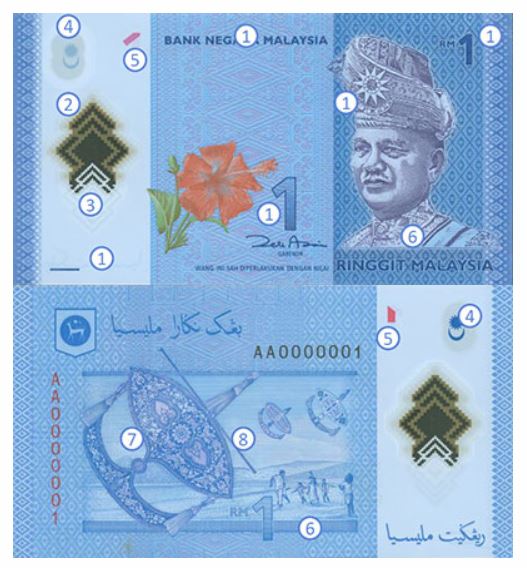 The current value of this ringgit bill would be about 22 euro cents.

Green note whose fourth series dates from June 2012. It shows Tuanku Abdul Rahman on the obverse and two rhinoceros hornbills in the jungle on the reverse. The Rhinoceros Hornbill (Rhinoceros Buceros) is one of the largest and most magnificent species of calaus in the world. Found in low densities in several rainforests of the country, this beautiful long-tailed, long-tailed forest bird plays an important role in traditional customs and ceremonies in Sarawak where it is known as ‘Bumi Kenyalang’ or ‘Land of Hornbills’. The Hornbill or “Hornbill” is also perceived as a symbol of strength and courage by the native communities of Sarawak. 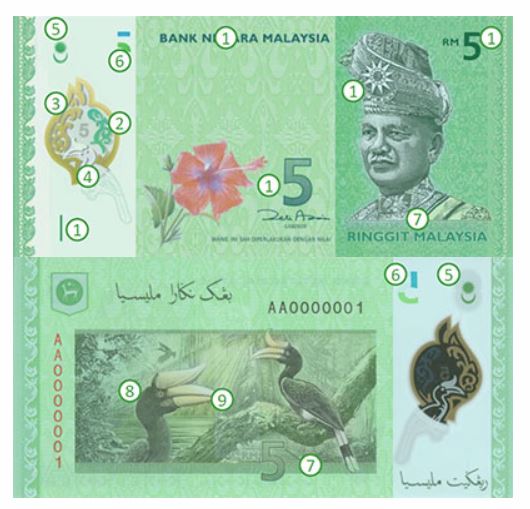 The current value of this five ringgit bill would be one euro.

Ticket of reddish tones with the effigy of Tuanku Abdul Rahman on the obverse. This note dates from June 2012 (fourth series).

The 10 ringgit bill (RM10) shows on its reverse the lush rainforest of Malaysia, one of the oldest living jungles in the world. This jungle is the habitat of the spectacular Rafflesia, the largest flower in the world. The Rafflesia Azlanii species is native to Peninsular Malaysia and was first discovered in the Royal Belum Forest Reserve of Perak State in 2003. To commemorate its discovery, this majestic flower is named after the Sultan of Perak, the Sultan Azlan Muhibbuddin Shah ibni Almarhum Sultan Yusuff Izzuddin Shah Ghafarullahu-Lah. 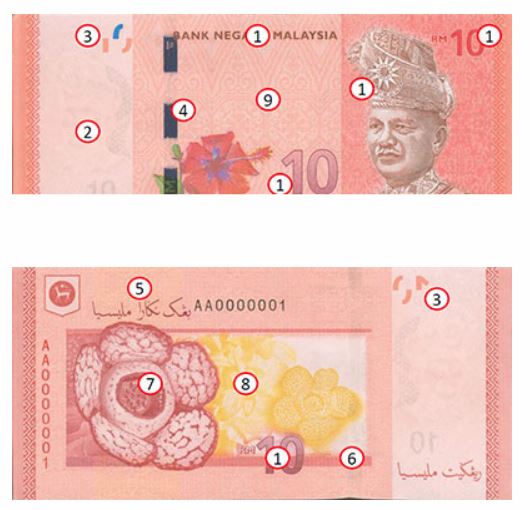 The current value of this ten ringgit bill would be two euros.

Orange banknote with King´s Tuanku Abdul Rahman portrait on the front. The one whown below is the fourth series and dates from June 2012.

The reverse side of this 20 ringgit bill (RM20) shows elements of the rich and colorful Malaysian marine life. The country’s tropical waters are the habitat of two of the most well-known species of endemic sea turtles in Malaysia: the hawksbill turtle (Eretmochelys imbricata) and the leatherback turtle (Dermochelys coriacea). The hawksbill turtle is easily identified by its curved beak and scaly shell, while the lute has leathery skin and seven ridges on its shell. These soft turtles are a reminder that their existence rests on the delicate balance of human activity and the conservation of marine life. 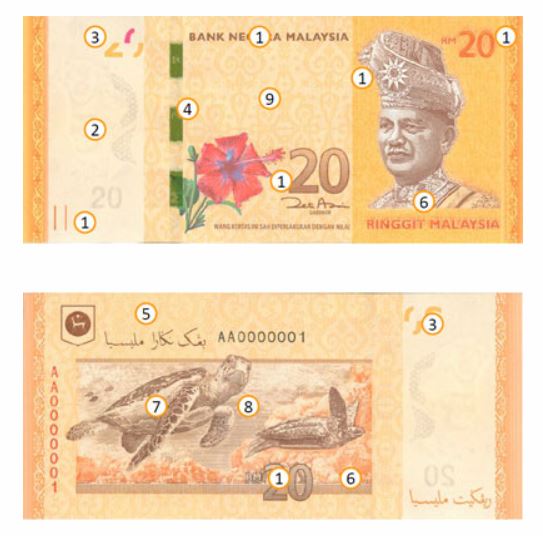 The current value of this twenty ringgit bill would be four euros.

The 50 ringgit banknote (RM50) adopts the predominant green-blue color. The current bill is from the fourth series and dates from July 2009.

The obverse shows Tuanku Abdul Rahman’s retraction on the obverse and palm oil trees on the reverse. On the reverse, the main theme of the design is the Malaysian National Mission to “move the economy up in the value chain” and reflects the economic transformation of Malaysia towards higher value-added activities in the agriculture, manufacturing and services sectors. the economy. The bottom and edges of the bill show fabric design patterns to reflect the craftsmanship and embroidery of traditional Malaysian textiles. 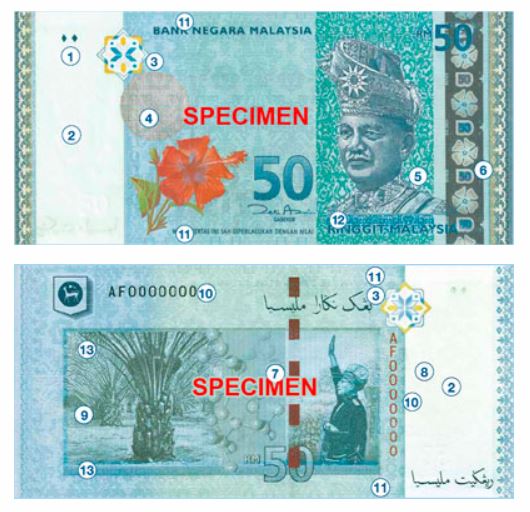 The current value of this fifty ringgit bill would be about eleven euros.

This light blue and orange banknote shows the portrait of Tuanku Abdul Rahman on the front. On the reverse shows the Kinabalu Park (Sabah), home of the majestic Mount Kinabalu (the highest mountain in Southeast Asia) and the spectacular limestone rock formations of Gunung Api Valley, which are located within the Mulu National Park (Sarawak). Both have been declared ‘World Heritage Sites’ by the United Nations Educational, Scientific and Cultural Organization (UNESCO) and represent the many natural wonders of Malaysia that give visitors a unique experience. 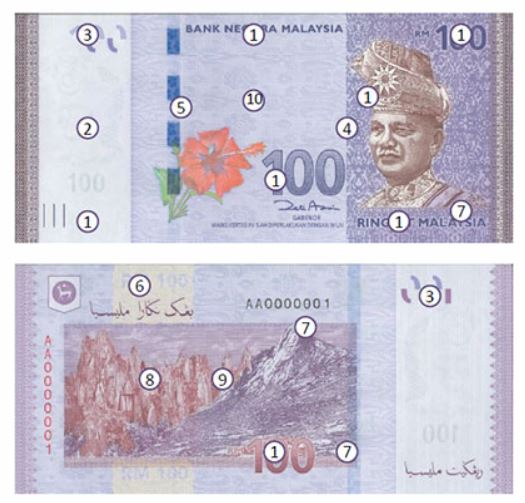 The current value of this one hundred ringgit bill would be about twenty two euros.

As you can see, the exchange rate in recent years has fluctuated between 4.5 and 4.8 ringgit per euro, but keep in mind that this graph represents the value of the Malaysian ringgit “currency” against the euro, and not the of the actual paper currency (the bills), which is lower. In fact, in the currency suppliers in Spain you can buy ringgit at an exchange rate of 4.11 MYR, for every euro. Nothing to do with the euro-ringgit currency exchange.

Google cannot guarantee the accuracy of the exchange rates shown. Confirm the current rates before making a transaction that may be affected by changes in exchange rates. ”

-These prices you see are usually wholesale prices of the ringgit currency versus the euro currency (paper currency and currency are not the same);

-This price can only be held by the banks (interbank market), that is, it is impossible to achieve it as a private individual.

If you need ringgit banknotes you will have to go through the retail banknote market (bank or currency provider). This market means that the MYRs have had to be “transported” by someone for you to enjoy them (or bought from travelers from Malaysia, passing through Spain previously). In other words, moving paper notes from one place to another has logistic costs that will make their selling price more expensive (the exchange rate that will be applied to you by the seller).

-The ringgit a currency not very abundant in Spain. Therefore it is not easy to find it available for sale in the currenciy suppliers. So it is good to anticipate the purchase and order them online to get a better price.

Where to exchange Malaysian ringgits in Spain

The 3 most popular places to change ringgits (MYR) in Spain are banks, exchange houses and the airport.

If what you want is to make a money transfer of euros to ringgit or vice-versa, then you will really be making a currency exchange and not a paper currency exchange. In this case, the operation is different. The money does not physically move in banknotes but instead transfers balance between bank accounts expressed in different denominations: euros and ringgits in this case.

First of all, ask your bank what they will charge you for a currency transfer from your euro account to another account in Malaysia (we assume) in ringgit. And apply the exchange rate to the amount sent and subtract the commission from the bank. This will give you a final amount in ringgit to be received by the recipient of your transfer from euro to ringgit.

And then compare that price and the final ringgit that arrive at the transfer recipient with the price of a couple of companies specialized in currency transfers such as Transferwise and Currencies Direct, which collaborate with Cambiator with adjusted prices.

And the other banks in Spain apply a less interesting rate and / or higher commissions as you can see in this table with the prices of international transfers from Bunq (with the same Transferwise engine) or Worldremit. On the right you have the amount in ringgit that the recipient of your transfer will receive with each possible player. 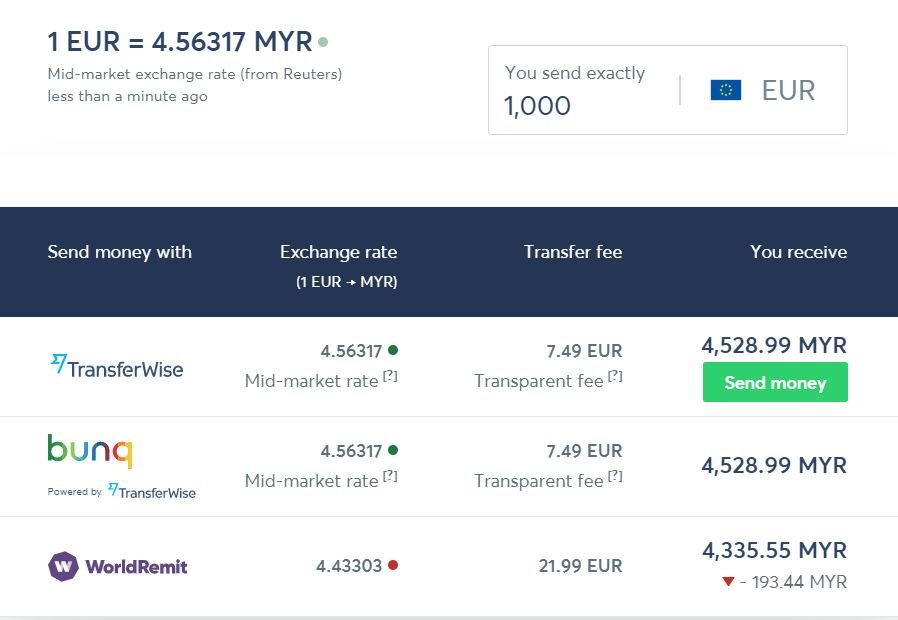 Therefore, we recommend clicking on our menu in the Transfers tab and simulating prices with Transferwise and Currencies Direct before making the transfer with your usual bank.