The Japanese Yen is the official currency of Japan. The yen was officially adopted by the Meiji government of Japan through a law signed on May 10, 1871. The yen is the third currency with the most movement in the world currency market after the US dollar and the euro.

The Japanese yen symbol is “¥” and its ISO 4217 code is JPY. In Japanese, yen is pronounced “en” and comes to mean “round object”. The euro to yen exchange rate (the one you’ll find if you buy or pay as a consumer in Japan) will be around 120 yens per euro. In other words, 1,000 yen would be equivalent today to about 8.3 euros as of the date of this post.

History of the Japanese yen

During the 18th and 19th centuries, the Spanish silver dollar circulated throughout Asia, including Japan and China. Manila galleons brought gold coins from America, mainly from Mexico, where they were minted. But from 1840 the gold coins were replaced by silver coins of eight reales or one peso.

In the second half of the nineteenth century, local currencies such as the Hong Kong dollar were minted but not being adopted by the Chinese, who preferred the coins of eight Mexican reals, the Hong Kong government stopped minting currency, selling currency mint and other machinery to Japan.

It was at that time when the Japanese authorities decided to start minting their own silver dollar coins with the name “yen” (“round object”). The “New Currency Law” of 1871 stipulated the adoption of a decimal system of calculation in which a yen was divided into 100 sen and 1000 rhine, with round coins as in the West. The sen and the rhine were eliminated in 1953 because of their low monetary value.

During the early 70s, before the energy crisis of 1973, the yen was a strong currency. But this strength against other currencies in the world made the country’s exports more expensive. Therefore, the Japanese government regularly intervened in the foreign exchange market (buying or selling dollars).

But in the first half of the 1980s, the yen dropped a lot in value, at a time when interest rates were higher in the US. than in Japan

The coins today have denominations of 500, 100, 50, 10, 5 and 1 yen respectively. Their shapes and edges are differentiated to help visually impaired people know the type of currency they handle.

As a curiosity, it must be said that the yen coins do not show the date of minting. Instead they show the year of the Emperor’s reign at the time of coinage. That is, a coin minted in 2009 would carry the date Heisei 21 (“year 21 of Emperor Akihito’s reign”).

Yen banknotes in circulation today have denominations of 10,000, 5,000, 2,000 and 1,000 yen respectively. They are printed by the Japanese National Printing Bureau at the request of the issuer, the Central Bank (Nippon Ginko).

As a curiosity, at the end of December 2018, the volume of yen in circulation by households, japanese companies and financial institutions, was 110.4 billion yen, of which, 17,000 million bills. If these bills were stacked, they would reach an approximate height of 1,698 kilometers, equivalent to 450 times the height of Mount Fuji. And if they were placed next to each other, they would reach a length of about 2.64 million kilometers (66 times around the world or seven times the distance from the earth to the moon).

Let’s look at each of these tickets below.

The 10,000 yen bill is brown and beige. It was first issued on November 1, 2004. Its obverse is dedicated to Yukichi Fukuzawa (1835-1901), Japanese writer, teacher and politician of the late nineteenth century. His ideas about government were based on his knowledge of Western political theory. The political teachings of his books served to modernize a still feudal Japan in his day. Since his death in 1901, Fukuzawa is recognized as the honor of being one of the founders of modern Japan and one of the leaders of the Meiji Enlightenment movement.

The reverse shows a phoenix from the Byodoin Buddhist Temple (Byōdō-in) created in 998 in the city of Uji, Kyoto Prefecture.

The countervaluation in euros of the ten thousand yen bill would be about 80 euros today.

The back of this note shows the iris painting “Kakitsubata-zu” by artist Ōgata Kōrin (1658-1716) from the Rinpa school of Japanese painting. Kōrin is known for its spectacular lacquered screens.

The countervaluation in euros of the five thousand yen bill would be about 40 euros today.

The 2,000 yen banknote is greenish and beige. It was first issued on July 19, 2000. Its obverse is dedicated to the Shureimon gate.

Shureimon is one of the two great gates of Shuri Castle in Naha, Okinawa Prefecture. Its origins date from the 16th century. The structure of this door is similar to that of Chinese doors of three heights and is covered by reddish tiles. The door was destroyed in 1945 during the Battle of Okinawa and rebuilt through local public collections between the 1950s and 1960s. It became the first part of Shuri Castle to be rebuilt, which took a few decades to recover its original appearance.

On the reverse is a scene from Genji’s story and the portrait of its author, the writer Murasaki Shikibu (970-1016). Shikibu is credited with the first Japanese novel (Genji Monogatari) and also the world’s first modern novel.

The countervaluation in euros of the two thousand yen bill would be about 16 euros today.

The 1,000 yen banknote is violet and beige. It was also issued for the first time on November 1, 2004 as 10000 and 5000 yen bills. Its obverse is dedicated to Hideyo Noguchi (1876-1928), a Japanese doctor specializing in the study of the bacteria, that discovered the pathogenic agent of neurosyphilis in 1913.

The back of this note shows Mount Fuji with some cherry blossoms. Mount Fuji (3776 meters high) is the highest peak on the island of Honshu and all of Japan. On clear days you can easily see it from Tokyo itself. Mount Fuji is also the national symbol of Japan.

The countervalue in euros of the thousand yen bill would be about 8 euros today.

The exchange rate of the euro with respect to the Japanese yen oscillates at all times. If you search on Google for “Euro to Yen rate” you will find dozens of websites (currency converters) that offer a “rate” of the day, even with Google Finance prices. Something like this (December 9th, 2019):

As you can see, the change last year has ranged between 123 and 129 yen per euro, but keep in mind that this graph represents the value of the “currency” yen against the euro, and not that of the paper currency (banknotes or travel money), which is lower. In fact, at the exchange providers in Spain you can buy Japanese yen at an exchange rate of between 107 and 113 yen for each euro, nothing to do with the euro-yen currency exchange (120 yen per euro).

-These prices you see are usually wholesale rates of the Japanese yen against the euro currency;

-This rate can only have the banks with each other, that is, it is impossible to get it as a private individual.

If you need yen banknotes you will have to go through the retail banknote market (banks or currency providers). This market means that Japanese yen have had to be “transported” by someone for you to enjoy them (or bought from Japanese tourists passing through Spain previously). In other words, moving paper notes from one place to another has logistic costs that will make their selling price more expensive (the exchange rate that will be applied to you by the seller).

-The Japanese yen is a currency not very common or abundant in Spain, so it is not so easy to find it available for sale. Therefore it is good to anticipate the purchase and order it online to get a better price.

To know the euro to yen exchange rate today in Spain, the best thing you can do is use our currency comparison engine.

Where to exchange Japanese yens in Spain

The 3 most popular places to change yen in Spain are banks, exchange houses and the airport.

Where to make a transfer of euros to yens

If what you want is to make a transfer from euros to yen or vice versa, then you are really making a currency exchange and not a travel money currency exchange. In this case, the operation is different. The money does not physically move in banknotes but instead transfers balance between bank accounts expressed in different denominations: euros and yen in this case.

First of all, ask your bank what it will charge you for a currency transfer from your euro account to another account in Japan (we assume) in Japanese yen. And apply the exchange rate to the amount sent and subtract the commission from the bank. This will give you a final amount in yen to be received by the recipient of your transfer from euro to Japanese yen.

And then compare that price and the final yen that reach the transfer recipient with the price of a couple of companies specializing in currency transfers such as Transferwise and Currencies Direct, which collaborate with Cambiator with adjusted prices.

And the other banks in Spain apply a less interesting rate and / or higher commissions as you can see in this table with the international transfer prices of Bunq (with the same engine and Transferwise price), Rabobank, AIB or Ulster Bank. On the right you have the amount in yen that the recipient of your transfer will receive with each possible player. 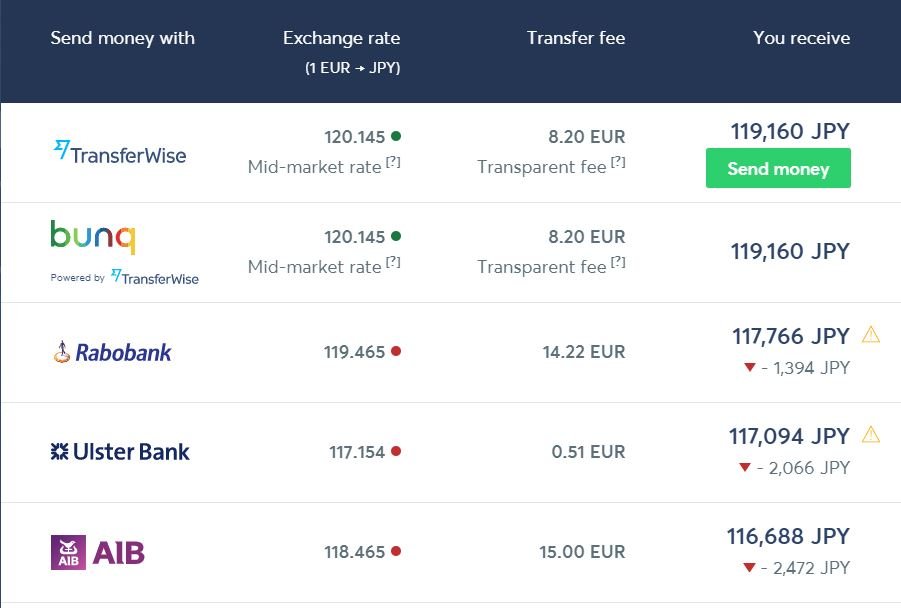 Therefore, we recommend you to click on our menu in the Transfers tab and simulate prices with Transferwise and with Currencies Direct before transferring euros to yen with your usual bank.