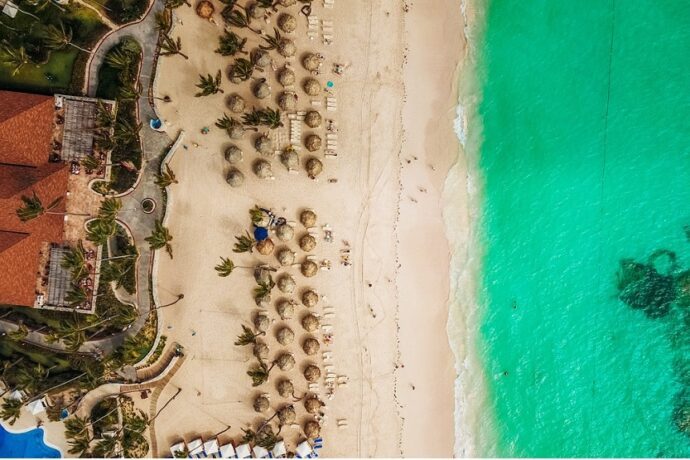 Currently, the exchange rate of the euro with respect to the peso (see below), stands at 57 pesos per euro (1 EUR = 57 DOP).

History of the Dominican peso

On the website of the Central Bank of the Dominican Republic you have a detailed history of the country’s currency. We summarize it here.

La Española (Hispaniola), as the Dominican was known in the colonial period, was one of the first American colonies where coins circulated. In 1505 the kings of Spain sent to mint maravedíes to send them to the island for their on-site coinage In 1542 a Mint is created on the island (in Mexico it dates from 1535) to coin silver and fleece.

With the Independence of the Dominican Republic from Spain in 1844, Dominican coins called “”cuarto de real” (fourth part of the real coin) began to circulate, which in turn was a Spanish currency and were manufactured in the United States. It is said that the phrase “fourth” used in popular slang to refer to money comes from these origins.

The Dominican Republic decimalized its currency in 1877, dividing the peso into 100 cents. After the economic crisis of 1880 the currency lost value and a second currency circulated around the country, the Dominican franc. 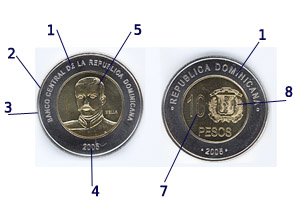 1.- Legend: Central Bank of the Dominican Republic
2.- Edge: Smooth
3.- Singing: Striated thick and interrupted
4.- Exergo: Year of Coinage 2005
5.- Central Figure: The effigy of the patrician Matías Ramón Mella
6.- Field: The part that is completely smooth in the coin

Reverse of the coin:

All these banknotes incorporate the 2014 YEAR of issue and the rose of Bayahibe, which is the national flower of the Dominican Republic thanks to Law 146-11 of the National Congress of the country. The rose of Bayahibe (pereskia quisqueyana) is a cactus with leaves that can measure up to 6 meters high, discovered in 1977 and in danger of extinction, for which it was declared a Dominican national flower.

rose of Bayahibe in Dominican Republic banknotes issued in 2014.

All the bills of the Dominican Republic carry the phrase: “This note has a liberating force for the payment of all public or private obligations”. “Este billete tiene fuerza liberatoria para el pago de todas las obligaciones públicas o privadas”.

The 50 peso bill is bright purple. It dates from 2014 and on the obverse shows the Primada de América Cathedral, Santa María la Menor. Also known as the Cathedral of Santo Domingo, it was declared in 1546 the first New World cathedral by Pope Paul III, at the request of Emperor Charles V of Spain and Germany.

The reverse shows the Basilica Nuestra Señora de la Altagracia (Basilica of Higüey). This cathedral is of modern construction (1970) and is located in the city of Salvaleón de Higüey.

The countervaluation in euros of this 50-peso bill is about 0.82 euro cents today in currency providers in Spain. 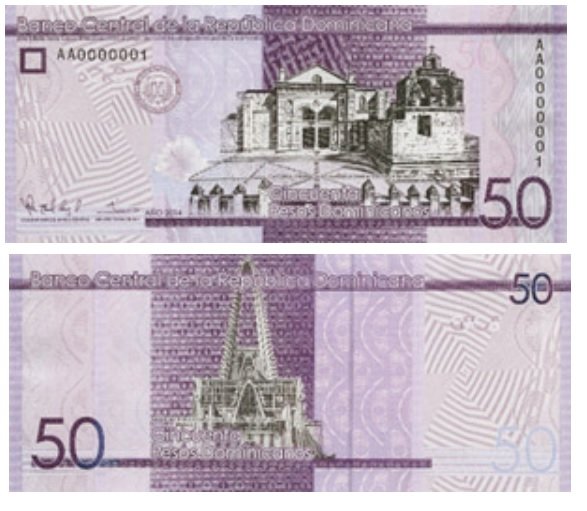 The 100 Dominican pesos bill is orange and dates from 2014. On the obverse it shows the effigies of the three Fathers of the Dominican Homeland, Juan Palo Duarte y Díez, Francisco del Rosario Sánchez and Matías Ramón Mella Castillo.

The reverse shows the Puerta del Conde, inside the Baluarte del Conde located in the Colonial City of Santo Domingo. The appellation of “Count” is due to the Count of Peñalba, former General Captain of Santo Domingo, who in 1655 successfully repelled a British invasion. The door is an emblematic place of the Dominican Republic because on February 27, 1844, Francisco del Rosario Sánchez declared the independence of the nation while raising the Dominican flag in this place.

The countervaluation in euros of this 50-peso bill is about 1.64 euros today in currency providers in Spain. 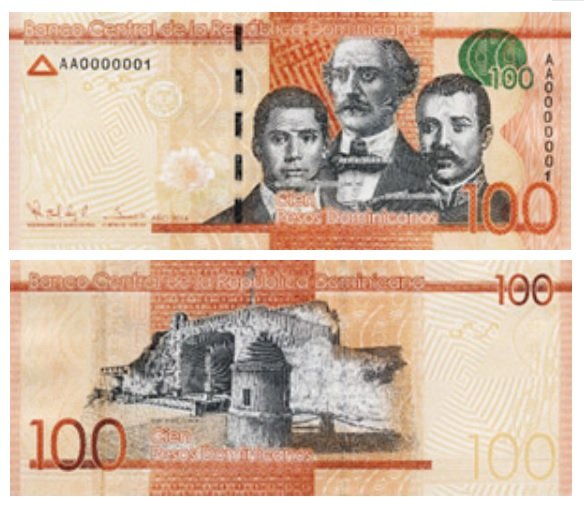 The 200 Dominican peso bill is pink and dates back to 2014. On the obverse it shows the portraits of the Mirabal sisters (Patria, Minerva and María Teresa) who were killed on November 25, 1960 after their hard opposition to the dictatorship of Rafael Leónidas Trujillo. On the reverse you can see the monument to the Mirabal Sisters in Salcedo.

The countervaluation in euros of this 50-peso bill is about 3.2 euros today in currency providers in Spain. 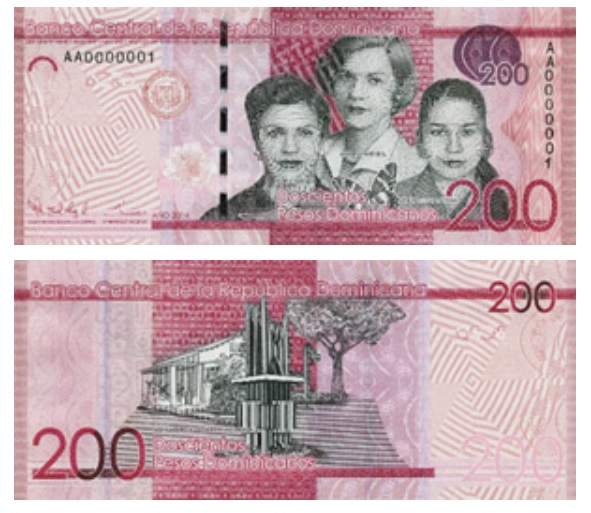 The 200 Dominican peso bill is turquoise and has two versions, the original 2014 and a special edition in 2017 on the occasion of the 70th anniversary of the Central Bank of the Dominican Republic, which has improved security measures over the 2014 edition ( see below).

The countervaluation in euros of this 50-peso bill is about 8.2 euros today in currency providers in Spain. 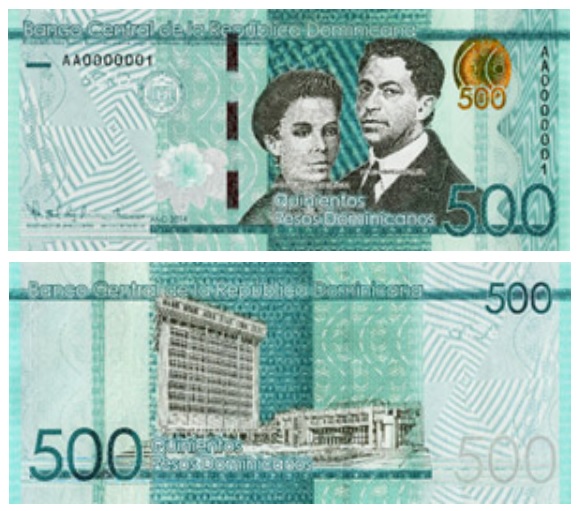 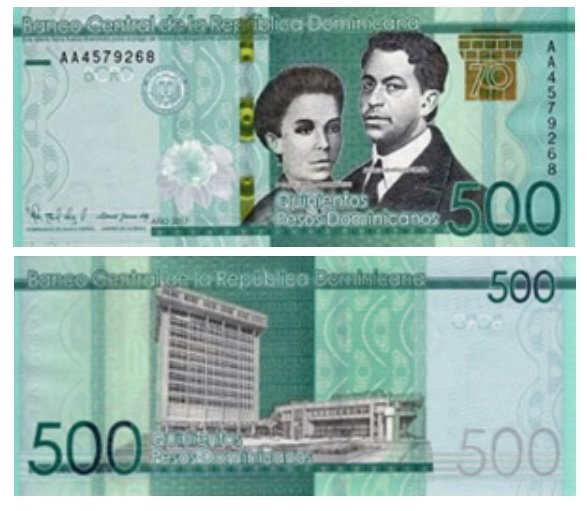 The 1,000 Dominican peso bill is reddish and dates back to 2014. The obverse shows the front of the National Palace of the Dominican Republic, official residence of the President of the Republic and headquarters of the Executive Branch.

On the reverse is the Alcazar of Diego Colón y Perestrelo (1479-1526), son and successor of Christopher Columbus in the admiralty, viceroyalty and government of the Indies, based in Santo Domingo.

The countervaluation in euros of this 50-peso bill is about 16.4 euros today in currency providers in Spain. 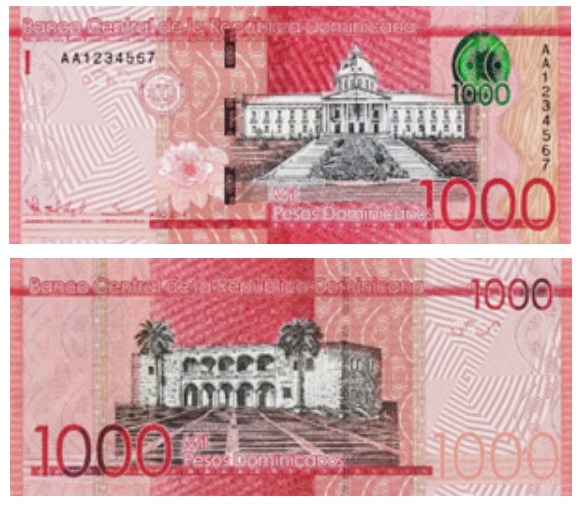 On the reverse you can see the Eduardo Brito National Theater, one of the most emblematic buildings in the Republic, opened in 1973.

The countervaluation in euros of this 50-peso bill is about 32.8 euros today in currency providers in Spain. 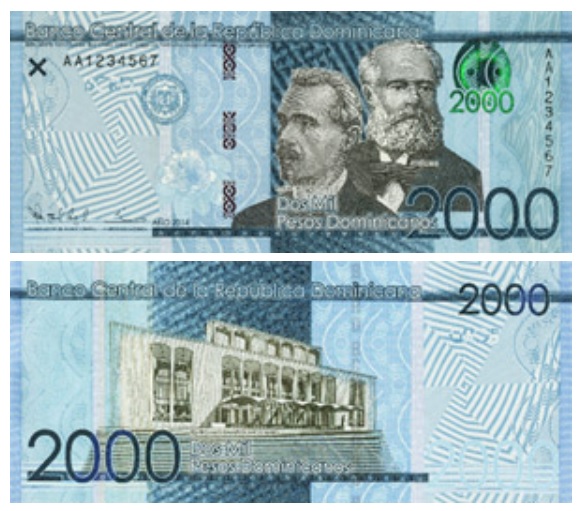 The change of the euro with respect to the peso oscillates at all times. If you search on Google for “Dominican euro exchange rate” you will find dozens of websites (“currency converters”) that offer a “price” of the day, even with the prices of Google Finance. Something like that (December 28, 2019):

As you can see, the exchange rates last year have ranged between 56 and 59 pesos per euro, but keep in mind that this graph represents the value of the “currency” Dominican peso against the euro, and not that of the real paper currency, that is lower. In fact, in the currency suppliers in Spain you can buy “Dominicans” at an exchange rate between 47 and 51 DOPs, for every euro. Nothing to do with the euro to peso currency exchange.

-These rates you see are usually wholesale prices of the Dominican peso currency against the euro currency;

-This rates can only be accessed by banks operating with each other. That is, it is impossible to get them as individuals;

If you need pesos in banknotes you will have to go through the retail banknote market (bank or exchange provider). This market means that Dominican pesos have had to be “transported” by someone so that you can enjoy them (or bought from travelers coming from the Dominican Republic, passing through Spain previously). In other words, moving paper money from one place to another has logistic costs that will make their selling price more expensive (the exchange rate that will be applied to you by the seller).

-The Dominican peso is a currency not very common or abundant in Spain, so it is not so easy to find it available for sale. Therefore it is good to anticipate the purchase and order it online to get a better price.

Where to change Dominican pesos in Spain

The 3 most popular places to change DOP in Spain are banks, exchange houses and the airport.

To know the Dominican euro-peso exchange rate, the best thing you can do is use our currency comparator.