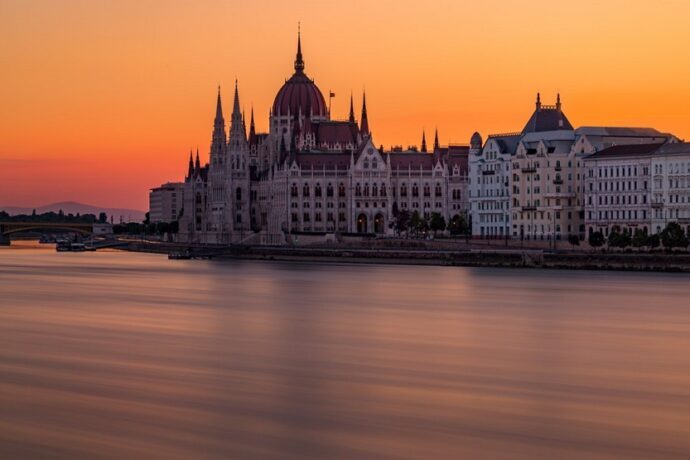 The Hungarian forint is the currency of Hungary since 1946. It is represented by the symbol Ft and the ISO code 4217, HUF.

The forint is also known as forinto (in Hungarian, forint), denomination that comes from the Italian city of Florence, in which there were 1,252 “fiorinos”, gold coins circulating in Europe.

The Hungarian forint is divided into 100 filerest although these decimal units are not actually used or in circulation in Hungary because of their very low value at the exchange rate with the euro (see below). At present, 1 euro is equivalent to about 332.21 HUF (see below).

History of the Hungarian forint

In addition to taking its name from the “fiorina” coins minted in Florence (Italy) in 1252, the same name is attributed to the “florentinus” gold coin that had circulated in Hungary since 1325, deriving from the current “forint”. King Charles I of Hungary (1288-1342) is credited with introducing a complete monetary system in Hungary based on the implicit value of the coins, expressed in the gold metal.

From then until the 1980s, this currency remained relatively stable in the markets, but the transition of Hungary to a market economy in the early 90s of the last century, after the fall of the Berlin Wall, had serious consequences on its price.

In those 1990s, the value of the Hungarian guilder (inflation in Hungary was double digits, even reaching 35% in 1991) deteriorated greatly. Since 2001, Hungarian inflation remains in a single digit and the forint is a fully convertible currency. Especially since the accession of Hungary to the European Union on May 1, 2004.

In fact, Hungary is on track to abandon the forint and join the other 19 countries of the European Union of the 28 that already use the euro.

Forint banknotes have existed since 1946, the date on which the Hungarian National Bank (Magyar Nemzeti Bank – MNB) introduced banknotes with its first two denominations, the 10 Ft and the 100 Ft banknote.

Each current forint banknote shows a famous Hungarian leader on the obverse, and somewhere linked to it on the reverse. All bills have a watermark and a visible metal band. All 1,000 forints banknotes and theirs superiors in value have the same size of 154 x 70 mm.

The following HUF banknotes are currently circulating in Hungary:

This bill of reddish tones came to light on July 4, 2018. It measures 154 mm x 70 mm and on the obverse shows the portrait of Ferenc Rákóczi. Francis Rákóczi II of Felsővadász (1676-1735) led the Hungarian independence war of 1703-1711 against the rule of the Habsburgs in his capacity as prince of the confederate states for the freedom of the Kingdom of Hungary. He was also Prince of Transylvania, Imperial Prince and member of the Order of the Golden Fleece.

The reverse shows a view of the castle of Sárospatak, city of Hungary (county of Borsod-Abaúj-Zemplén), at the foot of the Bodrog river. Sárospatak has the status of a city since 1201. King Andrew II of Hungary built the castle depcited on the note, where his wife Gertrudis gave birth to his daughter Elisabeth, the future Elisabeth of Hungary.

The countervaluation in euros at the exchange rate today in Spain of the 500 forints note is approximately 1,5 euros.

The reverse side of this 100 HUF banknote is dedicated to the Hercules fountain, of the Renaissance palace of Visegrad.

The value in euros of this 1000 HUF banknote would be today in Spain of 3 euros.

On the obverse it shows the portrait of Prince Gábor Bethlen or Gabriel Bethlen (1580-1629). Born in Iktár in 1580, he was a Hungarian noble, Prince of Transylvania. His contribution is due to his great scientific knowledge. Gabor is considered one of the most relevant figures in Hungarian history of the 17th century. Therefore, on the back of the bill he appears speaking about science together with other scientists.

The value in euros of this 2000 HUF banknote would be today in Spain of 6 euros.

On the obverse appears the effigy of Count István Széchenyi (1791-1860). Stephan Széchenyi of Sárvár-Felsővidék, as he is also known, was a Hungarian politician and writer, nicknamed “the greatest of the Hungarians.”

On the reverse is the residence of Széchenyi´s mansion in the Hungarian population of Nagycenk, with about 2000 inhabitants.

The value in euros of this 5000 HUF banknote would be today in Spain of 14 euros.

This banknote of violet tones was released on September 2, 2014 and has the same measures as the other banknotes: 154 mm x 70 mm.

The obverse shows King Stephen I of Hungary (975-1038). Nicknamed “the Saint” or “the Great,” Stephen I was the last great prince of the Hungarians and the first king of Hungary.

The reverse shows views of his city of birth, Esztergom (Estrigonia) belonging to the county of Komárom-Esztergom in Hungary. Since the founding of the Kingdom of Hungary it became the residence of the archbishop of Esztergom, the highest hierarchy of the Catholic Church in the country.

The value in euros of this 5000 HUF banknote would be today in Spain of 28 euros.

This bill of brown and green-blue tones came to light on September 25, 2015 and shares the same measures as the other bills: 154 mm x 70 mm.

The obverse shows Ferenc Deák of Kehida (1803-1876), a Hungarian politician known as “The Sage of the Fatherland.” On the reverse is the old parliament of Hungary.

The value in euros of this 5000 HUF banknote would be today in Spain of 56 euros.

Banknotes out of circulation

Beware of out-of-circulation forint banknotes, since they have the same design as their predecessors but lack their innovative security measures. Look at this table with the different security measures for new banknotes.

The euro to forint exchange rates oscillates at all times. If you search on Google “euro to hungarian forint rate” you will find dozens of websites (“currency converters”) that offer a “rate” of the day. Something like this (December 26, 2019):

As you can see, the exchange rates last year have oscillated between 312 and 335 forints per euro, but keep in mind that this graph represents the value of the “currency” forint against the euro, and not that of the paper currency, which is lower. In fact, in the currency providers in Spain you can buy Hungarian forints at an exchange rate of between 289 and 295 HUF for each euro, nothing to do with the exchange of euro to hungarian forint currencies.

-These prices you see are usually wholesale prices of the Hungarian forint currency against the Euro currency and not those of paper currency;

-Only banks can have these rates with each other. That is, it is impossible to get them as a individuals.

If you need paper forint banknotes you will have to go through the retail travel money market (bank or exchange). This market means that the Hungarian forints have had to be “transported” by someone for you to enjoy them (or bought from travelers from Hungary passing through Spain previously). In other words, moving banknotes from one place to another has logistic costs that will make their selling price more expensive (the exchange rate that will be applied to you by the seller).

-The Hungarian forint is a currency not very common or abundant in Spain, so it is not so easy to find it available for sale. Therefore it is good to anticipate the purchase and order it online to get a better price.

Where to exchange hungarian forints in Spain

The 3 most popular places to change HUF in Spain are banks, currency suppliers and the airports.

Of these, the least recommended place to buy are airports and any business that charges you a commission in addition to a “margin of exchange” (difference between the price for which you paid the currency and the price for which they sell it to you). That is, most banks and some currency providers charge you a commission when you change in person without first going through their website to book online and thus avoid this commission.

To know the Euro to Hungarian forint rate in currency providers, banks and your airport, in Spain, the best thing you can do is use our currency comparator. It is free and will save you money and time.

If your are in Spain or planning a visit, click on the link of your interest as you want to buy forints or sell them in exchange for euros and you will see where to get the best rates in your city (Madrid, Barcelona, Alicante, Valencia, Seville, etc.):

Where to make a transfer of euros to forints

If what you want is to make a transfer from euros to forints or vice versa, then you are really making a currency exchange and not a travel money currency exchange. In this case, the operation is different. The money does not physically move in banknotes but instead transfers balance between bank accounts expressed in different denominations: euros and forints in this case.

First of all, ask your local bank what it will charge you for a currency transfer from your euro account to another account in Hungary (we assume) in hungarian forints. And apply the exchange rate to the amount sent and subtract the commission from the bank. This will give you a final amount in forints to be received by the recipient of your euro to forint bank transfer.

And then compare that price and the final forints that reach the transfer recipient with the price of a couple of companies specializing in currency transfers such as Transferwise and Currencies Direct, which collaborate with Cambiator with adjusted prices.

And the other banks in Spain apply a less interesting rate and / or higher commissions as you can see in this table with the international transfer prices of Bunq (with the same engine and Transferwise price), N26, Rabobank or AIB. On the right you have the amount in yen that the recipient of your transfer will receive with each possible player. 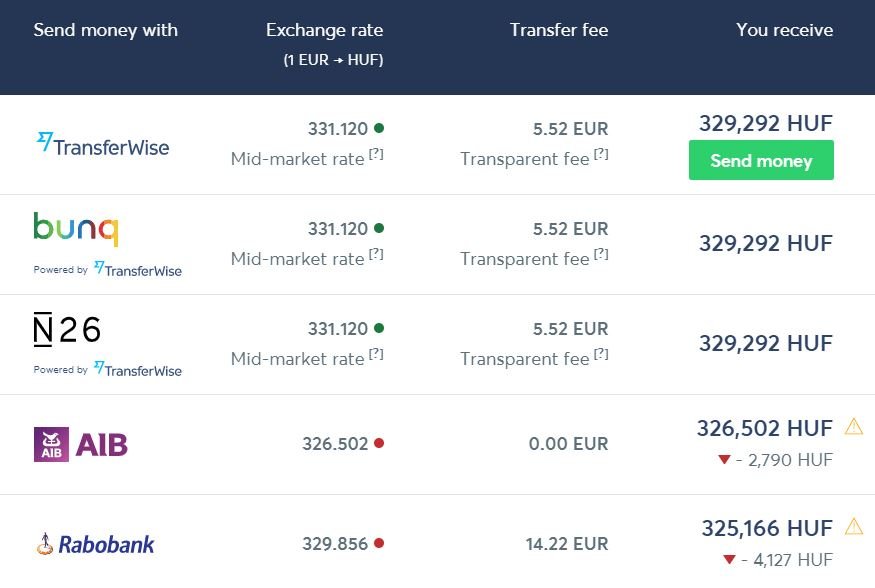 Therefore, we recommend clicking on our menu in the Money Transfers tab and simulating prices with Transferwise and with Currencies Direct before transferring euros to forints with your usual bank (BBVA, Santander, CaixaBank, Bankia, etc.).