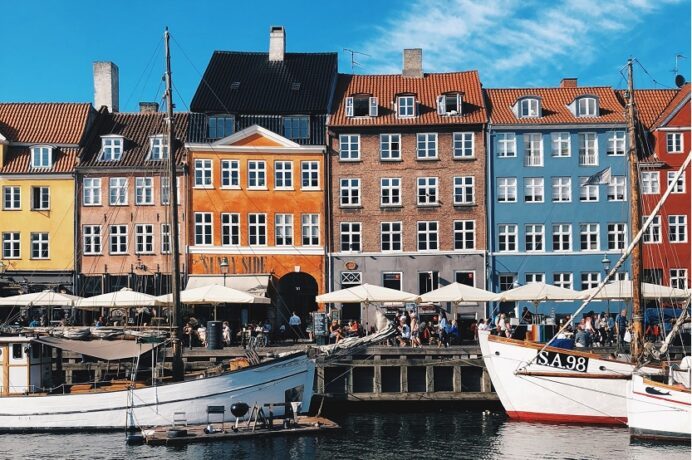 The Danishcrown (Danish krona) is the legal tender in Denmark and its autonomous overseas provinces (the Faroe Islands and Greenland). Its ISO 4217 code is DKK and its symbol or abbreviation is “kr”, always written after the quantity. A Danish crown is subdivided into 100 cents (øre).

As of November 2019, the equivalence between the Danish krona currency and the euro is 1 euro = 7.47 DKK.

History of the Danish crown

The Danish crown was introduced as the official currency of the Kingdom of Denmark in 1875, replacing the Rigsdaler. In any case, various currencies with the denomination of crown had already circulated in the country since the beginning of the 17th century.

The new crown was created simultaneously in three countries (Denmark, Sweden and Norway) to form the Scandinavian Monetary Union, which remained in force until World War I. Despite this, the three countries decided to keep the name “crown” of their respective and, from that moment, different currencies, modifying their corresponding surnames (Danish crown DKK, Swedish crown SEK and Norwegian crown NOK).

The Danmarks Nationalbank (National Bank of Denmark) has been the only body authorized to issue Danish crown coins and notes until 2016. Since then this task has been put in the hands of outsourced companies.

There is a project of the autonomous province of Greenland to coin coins and print crowns bills independently, although a start date has not yet been set.

The design of Danish coins ensures that they are easy to distinguish and that people have security in their cash payments. Following this criterion, the series is divided into three sequences, each with its own alloy and metallic color: bronze and aluminum gold for the highest value coins (10 and 20 crowns), cupronickel silver for intermediate value ones (1,2 and 5 crowns) and bronze for the smallest (50 øre).

There are currently Danish crowns coins in circulation (all from 1875), with the following values:

On the obverse of all Danish coins appears the effigy of Queen Marguerite II, except that of 50 øre, which features the crown of Cristian V, symbol of the Danish monarchy. As for the crowns coins, the most characteristic is that of 1 kr, easily recognizable by its central hole. 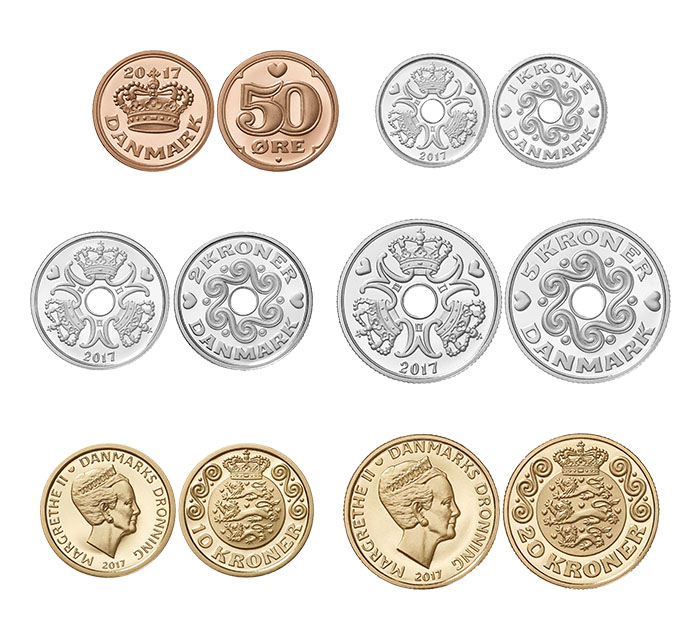 The current series of Danish crowns banknotes was put into circulation between 2009 and 2011, although for the Central Bank, any bill issued after 1945 is legal and can be exchanged for an ongoing banknote.

The current series is known as the “series of bridges”, as its obverse are decorated with images of different bridges of the country’s geography, with designs by artist Karin Brigitte Lund. The reverses are dedicated to outstanding archaeological pieces of the prehistory of Denmark.

The central figure of this banknote is the Sallingsund Bridge (1,717 meters in length), which connects the island of Mors with continental Denmark. The obverse shows the image of the Skarpsalling vessel, whose age dates back to 3,200 B.C. This note is colured violet and its  exchange rate is about 6.50 euros. 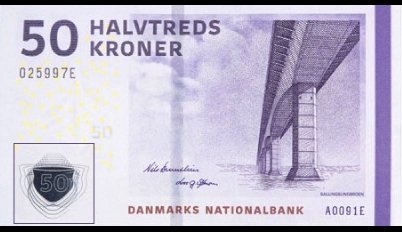 The orange (golden) 100 Danish crowns banknote presents on its obverse the image of the Lillebaelt bridge, between Jutland and the island of Funen. On the reverse appears a prehistoric dagger found on the same island. Its value at the current exchange rate is just over 13 euros and the Danes popularly refer to it with the name of hund (dog). 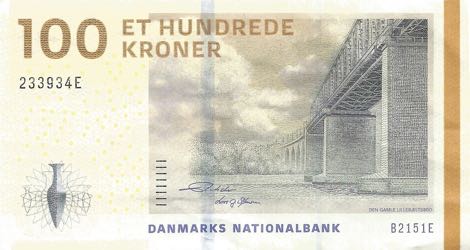 The Knippelsbro swing bridge, in the port of Copenhagen, is the protagonist of the obverse of this 200 DKK banknote. The reverse is dedicated to the Langstrup Belt, one of the most representative archaeological pieces of the Bronze age in Scandinavia. This note is greenish and its value is about 26 euros. 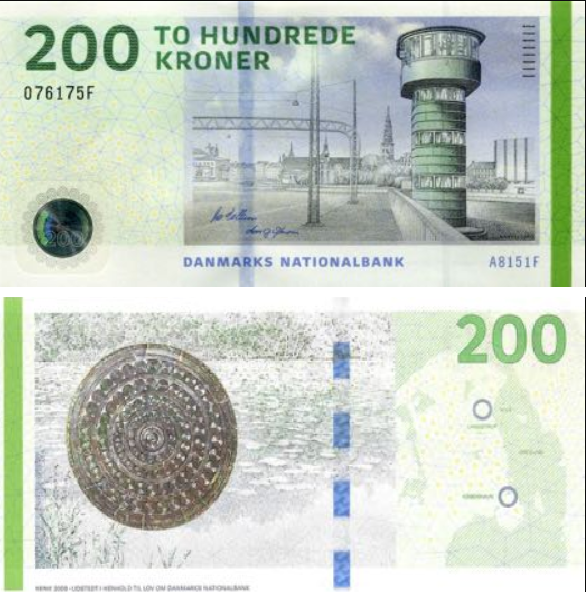 The color chosen for the 500 Danish crowns bill is blue. On its obverse appears the Bridge of Queen Alexandra, better known in Denmark with the name of Møn. And on its back it shows the Keldby bronze cube, found in Danish lands but probably manufactured in Greece 2,500 years ago. 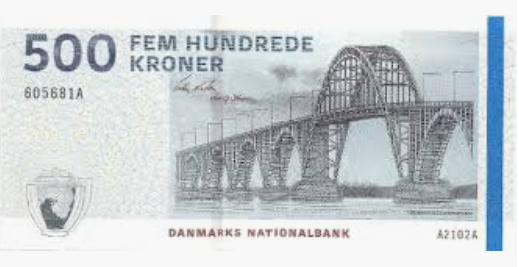 The Danish crowns banknote of greater value is red and offers on its obverse a beautiful image of the Storebæltsforbindelsen, a 6.7-kilometer-long bridge that connects Funen Island with the Jutland peninsula. Its approximate value at the current change of about 133 euros.

The exchange of the euro with respect to the Danish krona is relatively stable, just subject to slight fluctuations. If you search Google for “Euro to Danish crown rate” you will find dozens of websites (“currency converters”) that offer a “price” of the day. You will also see this graph with the prices of that pair of Google Finance currencies. Something like that (November 11th, 2019):

As you can see, the change in the last year has barely moved outside the range from 7.44 DKK to 7.48 DKK per euro, but it should be borne in mind that this graph represents the value of the “currency Danish krona against the euro, and not that of the paper currency, which is lower. In fact, in the exchange suppliers in Spain you can buy Danish crowns today at an exchange rate around DKK 7.00 per euro. Nothing to do with the Euro to Danish crown currency exchange.

So, when you see these values ​​on Google and other currency converters with your mobile, you should keep in mind the following:

If you need Danish crowns banknotes you will have to go through the retail paper market (bank or supplier). This market means that the crowns have had to be “transported” by someone for you to enjoy them (or bought from travelers from Denmark passing through Spain previously). In other words, moving DKK notes from one place to another has logistic costs that will make its selling price more expensive (the exchange rate that will be applied to you by the seller).

The Danish crown is not a very abundant currency in Spain, although it is not very difficult to obtain. Despite that, its price is logically more expensive in Spain than in Denmark. If you decide to buy Danish crowns in Spain, it is good to anticipate the purchase and order them online to get a better price.

Where to exchange Danish crowns in Spain

The three most popular places to change Danish crowns in Spain are banks, exchange suppliers and the airport. Needless to say, we have to change it in a hotel because we are not going to apply a competitive exchange rate there, they will charge you an additional commission and also, they will surely round you up to give you the DKK notes they have .

Of these 3, the least recommended place to buy is the airport or any business that charges you a commission in addition to a “margin of exchange”.

To know the Euro to Danish crown rate, the best thing you can do is use our currency comparator.

Where to make a transfer of euros to Danish crowns

If what you want is to make a transfer of euros to danish koruna or vice versa, then you will really be making a currency exchange and not a travel money currency exchange. In this case, the operation is different. The money does not physically move in banknotes but instead transfers balance between bank accounts expressed in different denominations: euros and crowns in this case.

First of all, ask your bank what they will charge you for a currency transfer from your account in euros to another account in Denmark (we assume) in crowns. And apply the exchange rate to the amount sent and subtract the commission from the bank. This will give you a final amount in Danish crowns to be received by the recipient of your transfer of euro to crowns.

And then compare that price and the final korunas that reach the recipient of the transfer with the price of a couple of companies specialized in currency transfers such as Transferwise and Currencies Direct, which collaborate with Cambiator with adjusted prices. 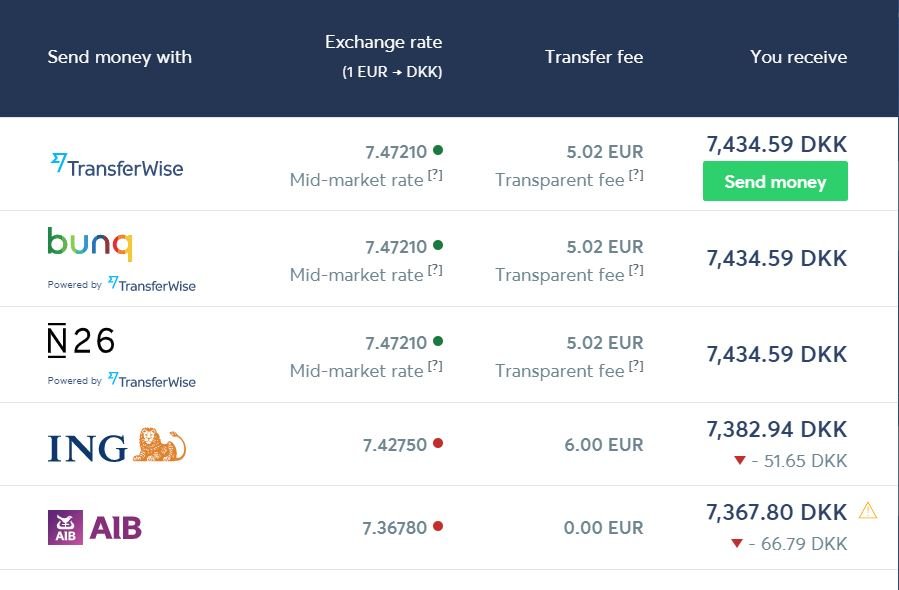 And the other banks in Spain apply a less interesting rate and / or higher commissions as you can see in this table with the international transfer prices of N26, ING or AIB. On the right you have the amount in crowns that the recipient of your transfer will receive.

Therefore, we recommend clicking on our menu in the Transfers tab and simulating prices with Transferwise and Currencies Direct before making the transfer with your usual bank.